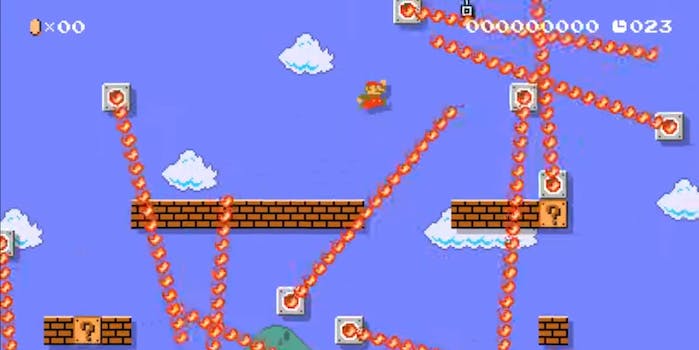 This level will give you anxiety.

Super Mario Maker 2 was released less than a month ago, but users have already created a number of ambitious levels.

The side-scrolling game, released on June 28, allows players to create their own levels. Courses in Super Mario Maker 2 can be shared online, where other players can enjoy them. While most users aim to create entertaining, beatable levels for the Nintendo Switch exclusive, a community of creators with a different goal has emerged. These creators make ultra-challenging levels that are nearly impossible to beat. One such level, created by Twitter user @YTSunnys, has been making the rounds online. Its use of dozens of moving fire bars, in particular, inspired countless memes.

After @YTSunny shared an intimidating video of their creation online, viewers obsessed over the anxiety-inducing level. “Cool, I’m going to have nightmares about this tonight,” one user wrote. “I think I just had a panic attack watching this,” another user added.

This gave me so much anxiety

Clearly not the Fire Bar

One user even noted the insane time limit on the level of spinning death. Forty-five seconds to traverse all those flaming beams of horror? No thank you.

Just watching this spiked my stress levels. That time limit's the chaotic cherry on top of that sinister cake you've crafted for the masses.

Within no time, the stressful video had inspired a wave of memes. Many of the memes poked fun at the near-impossibility of the chaotic level. “If you pointed a gun to my head and told me to finish this level I would tell you to pull the trigger,” one user wrote.

If you pointed a gun to my head and told me to finish this level i would tell you to pull the trigger pic.twitter.com/6Xu1kdPVle

This is why Super Mario Maker shouldn't exist y'all. Professionals wouldn't do this nonsense!!! https://t.co/Jvz6Un1Kgv

While many people were poking fun at the anxiety-inducing level, others created on-point captions for the video. “The New York Times avoiding the word racist,” one user joking captioned the video.

it's mario maker 2, so it's likely this was a real run and not spliced

Navigating racism when you walk out the house pic.twitter.com/W2NSjIVR4x

This level is far from the most challenging creation to come from Super Mario Maker 2 players. Dozens of hair-tearing levels have been shared by these fire-loving masochists, so if @YTSunny’s level looked like fun to you, there is plenty more where that came from.