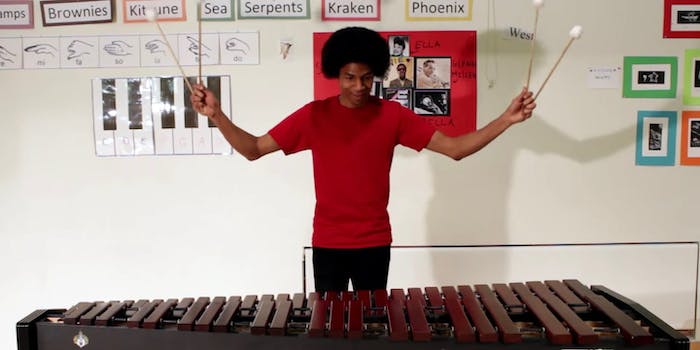 There’s something soothing about this Super Mario Bros. marimba cover

It's not the first time it's gone viral.

Over the years, we’ve probably heard just about every iteration of the Super Mario Bros. theme on a wide variety of instruments, but this older rendition on a marimba manages to hit all of the right notes.

The cover, which was first uploaded to YouTube by Aaron DeWayne in May 2015, has endured the test of time. The video is only 75 seconds long, but DeWayne performs a medley of tunes that any fan will surely recognize with ease. And to achieve the harmonies and chords of the original, he has four mallets at his disposal.

The Super Mario Bros. theme always brings back a nostalgic boost to our systems, but when it’s performed on the marimba, the melody has a level of comfort that playing it on another instrument (even similar yet different instruments like a xylophone or a Glockenspiel) simply couldn’t convey.

DeWayne’s video has gone viral several times since he first put it on YouTube, and as the viewer count has grown, he’s tracked its progress on his Instagram account. His last update came in January, and since then he’s garnered more than 1.5 million views and counting.

The most recent iteration of the video’s virality appears to have come all at once. First, someone on Twitter posted DeWayne’s video on Oct. 13, as did IGN several hours later. And soon after that, it ended up on the front page of Reddit.

DeWayne has posted more marimba videos on YouTube and Instagram since his biggest hit, and he even took another stab at Super Mario Bros. along with a Mario 64 cover this year. But if you’re wondering, yes, he can still astound with his performances.

I ran into a 5-octave marimba at NAMM. Haven't played mario in over a year…it's rough but not too bad right? #mario #marimba #namm

5 weeks ago, I started practicing 5-octave marimba again after over 10 years! I'm proud to say that my stamina and technique are better than ever, and my accuracy as well. Here's some Mario 64 music, in my opinion the greatest Mario game ever! #marimba NOT a #xylophone #mario #supermario #mario64 #dirediredocks #percussion #practice #metronome #four #mallets #4mallets #aarongrooves #afroninja