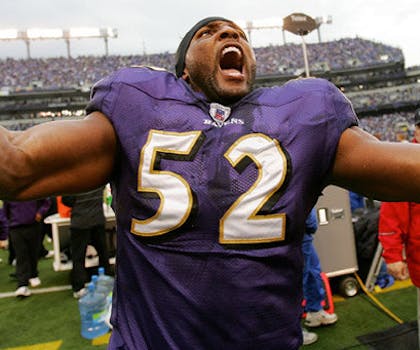 The package contained no tickets at all—just pictures of Colin Kaepernick and Joe Flacco attached to a note that read "Enjoy the game! Gooo Ravens! LOL."

A couple outside of San Francisco is $6,000 poorer today after an attempt to buy Super Bowl tickets on Craigslist backfired in a big, bad way.

Sharon Osgood, 49, and her unnamed boyfriend were determined to make it down to New Orleans this weekend so that they could cheer on their beloved San Francisco 49ers from inside of the Superdome. They’d tried everything to find tickets, turning to StubHub, local sellers, and whatever else they could think of.

When they realized they weren’t making any headway, they turned to Craigslist.

Osgood made a connection with a Florida man named R. Thomas Pham Guan. He said he was a huge Ravens fan (the 49ers play the Baltimore Ravens this weekend) but that he couldn’t make the trip because he had to stay home and attend to his pregnant wife.

The two parties communicated by phone and email for a week before Osgood and her boyfriend agreed to wire a money order Guan’s way. The total for four tickets: $5,900.

Osgood and her boyfriend received Guan’s FedEx package in the mail on Monday. When they opened it, they were alarmed to find out that the package contained no tickets at all. Instead, Guan had sent the two a photograph of quarterbacks Colin Kaepernick and Joe Flacco attached to a note that read “Enjoy the game! Gooo Ravens! LOL.”

Osgood told the San Jose Mercury News that the discovery made her “physically sick.”

“All over the envelope it says ‘Go Ravens’—even on the FedEx label,” she added.

The good news is that this story comes with a happy ending. After learning about the mean scheme, Ticketmaster CEO Nathan Hubbard called Osgood on the phone and told her that he’d make sure they got four free tickets to the game on Sunday.

Osgood and company are expected to arrive in New Orleans by Friday.