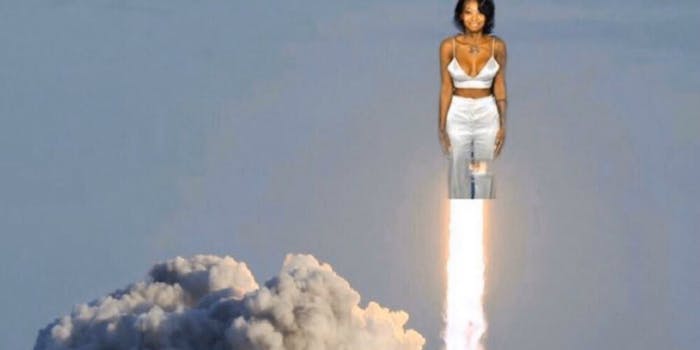 Summer Walker has the best response to becoming a meme

A photo of the singer at the Soul Train Awards got heavily memed.

After being roasted for allegedly being rude at her meet-and-greets, fans are now joking about Summer Walker’s appearance at BET’s Soul Train Awards–specifically a photo of Walker that has since been turned into a meme.

Fans took a picture of Walker standing awkwardly on the red carpet and are Photoshopping her into other situations.

“You don’t wat smoke. We pull up in TANKS!” Twitter user @welldamn wrote, along with an edited version of the photo, featuring Walker, who is standing in a plank-like position, as a service member in the U.S. Navy.

Another Photoshopped Walker to make it look as if she was a character in Grand Theft Auto.

Walker responded to the memes–taking it all in stride–by posting a few fan-made ones on her Instagram account.

“I’m really tired of this,” she wrote, along with a crying laughing emoji.

She also responded on Twitter to a fan’s meme of her reimagined as a rocket.

“These damn memes,” she wrote, along with a series of crying laughing emojis.

Walker is very open about having social anxiety and being an introvert. She even addressed her appearance at the Soul Train Awards.

In an Instagram post, Walker wrote that she was proud of herself for attending the award show, despite how nervous she felt.

“I wasn’t even gonna go today cause I was to scared, I was literally asking @lvrngram to just get me a wrist band so I could sit in the back alone in my reg deg clothes. When I got there I doged the red carpet and tried to get escorted through the back, finally getting to my seat I had to keep sneaking to pat my underarms from sweating, for no reason other than people were looking at me, I kept my arms folded and tried not to be seen,” she wrote.

Walker ended up winning Best New Artist at the show, and she had to go on stage and make a speech when collecting her award.

“By the time my name was called I couldn’t get a speech out like everyone one else from being so nervous & was shaking BUT I pushed through my #socialanxiety today and I’m really glad I did ..cause the soul train experience is something any true music lover will never forget,” she wrote.