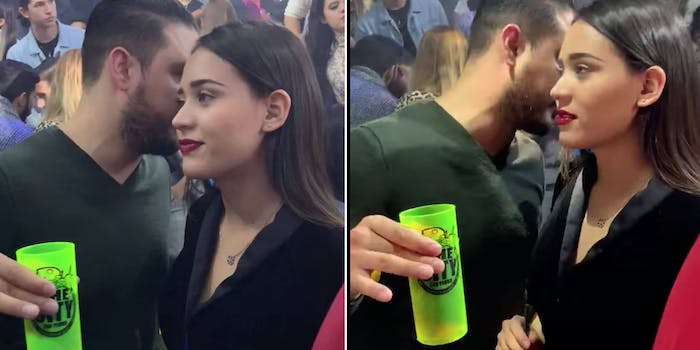 Only the good memes die young.

Nothing good in life lasts forever. This is especially true of memes spread on social media.

A brief video of a man whispering to a woman in a club—and the woman becoming increasingly not into whatever he is talking about—went viral on Wednesday. The tweet featuring a brief video had tens of thousands of likes when it was deleted by Twitter user @campmarylu on Thursday. The user’s account appears to have been deleted as well. 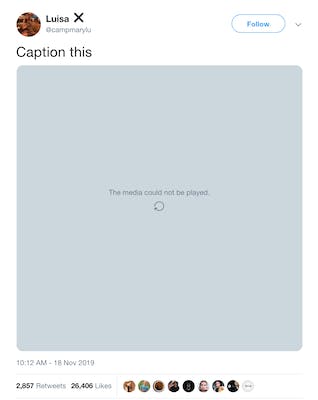 The 11-second clip is no longer on Twitter, but it has been exported to other social media platforms, where it lives on.

“We had a snake draft where I picked up JuJu and Joe Mixon who are both underperforming for my team. Needless to say I’ve been making huge pickups on the waiver wire to keep myself in the playoff hunt.” (via tw/campmarylu)

In general, Twitter users captioned the tweet with long diatribes about things that, stereotypically, men babble on about while women couldn’t care less. The average use of the meme exhausted the Twitter character limit to explain some obscure or inane aspect of a stereotypically bro-friendly pastime.

There was professional wrestling.

So one time, they teased this egg at #SurvivorSeries and people wondered what was in the egg. The Undertaker, according to his interview, thought he would be ‘The Egg Man’. This led to the debut of the Gobbledy Gooker.

There was fantasy football.

Me explaining that even though I’m in 8th place in fantasy football, if I run the table and these other 4 teams lose all remaining games, I have a shot at the playoffs

And of course, people took the opportunity to nitpick various aspects of the Star Wars and Marvel universes.

“And then, these big metal four legged machines called an AT-AT’s come over the horizon towards the rebel base. That’s the one on Hoth, the snow planet and sixth one in the system where the rebel’s are hiding… Anyway, these AT-AT’s attack the base and Luke and his team…”

Some even brought up that inexplicably beloved bro film, Shawshank Redemption.

Have you ever seen 'Shawshank Redemption'? I had heard about it, but I was like, some old guys in Prison? Who the hell wants to watch that? Turns out, ME! I was hungover last week on the couch watching Big Bang on TBS, and this movie came on, couldn't reach the remote so…

People also used the tweet to hold forth on topics they are particularly passionate about that don’t have stereotypically bro-friendly connotations. As is often the case with memes, some used the opportunity to opine on their pet subject. After all, what else is Twitter for but obsessing over the same narrow issue over and over again with slight variations on the theme?

One Twitter user talked about the challenges of implementing high-speed rail in the United States.

The problem with high speed 'bullet' trains or maglev trains in America lay mainly in the fact that we lack proper infrastructure, and getting that ready especially in the metropolitan areas where it could be most useful is a logistic nightmare. Not to mention the bureaucra…

You’d better believe that various members of Left Twitter used the opportunity to once again relitigate the fate of Jeffrey Epstein.

"Mark Epstein believes that his 66-year-old brother was killed, and he is challenging both the Department of Justice and New York City’s chief medical examiner. He insists the pathologist erred in concluding that his brother hanged himself in August"

And some of them were just kind of oddly specific and made us uncomfortable.

"So it's called gout, and it's a form of arthritis that impacts my big toe. Personally, I think it's God's way of saying you can't crush it so hard and eat great food and drink all the time. In old times, it was called the 'King's Disease' so in that case I'm kinda royalty, ha."

No meme can last forever, and this one’s life was cut incredibly short. But, we will always have the joy of participating in the meme and this man in the club will have the memory of saying something so off-putting that the whole internet found out about it.