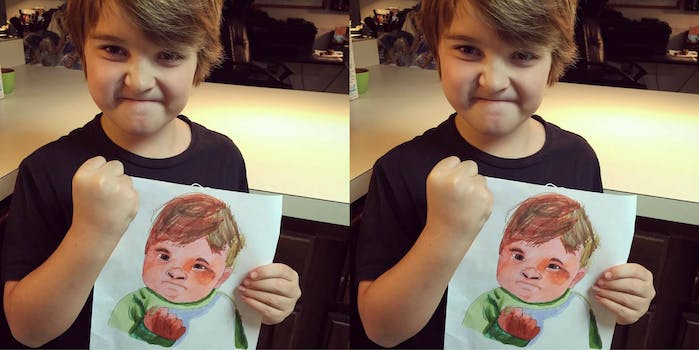 This is what memes are made of.

At the young age of 10, Sammy Griner has already saved his father’s life.

In a profile with British magazine New Statesman, “Success Kid” Griner and his mother Laney discussed his artistic passions, his father’s kidney transplant, and the fact that he doesn’t care much about being a viral sensation.

Thankfully, he seems to have grown up to be quite the normal tween. Life for Griner in Jacksonville, Florida, consists of skateboarding, illustrating, and homeschooling (only because he’s gotten in trouble at school for things like talking during class). Griner’s father Justin is an artist, too, and Sammy is following in his footsteps.

Today Griner’s image and likeness are still licensed and used in ads, most recently for Honey Bunches of Oats cereal. But aside from having helped his dad, Griner’s a bit resistant to the fame. He’s even kind of embarrassed that strangers want to take photos with him for a picture from decade ago of which he has no memory. But he’s thankful nonetheless.

As he told New Statesman:

“The only thing I’m happy for now with that picture is because it saved my dad from dying. He could’ve died so that’s the only time I’m happy—not when people say, ‘Oh, take a picture with me.’ I’m just happy because I probably wouldn’t have a dad anymore.

Griner may not be finished with the spotlight, however. He admitted that, yes, he’d like to go viral again, “just once.” But when asked if he would be fine with being known as Success Kid while also an artist, Griner took a moment to reflect.

“It’s actually a really hard question. Let me be a detective,” he replies slowly, stroking his chin. “I mean, I’m already famous and stuff, as you can see”—Sammy strikes another pose, one hand behind his head like a model—“but I think I would rather be known for my art.”