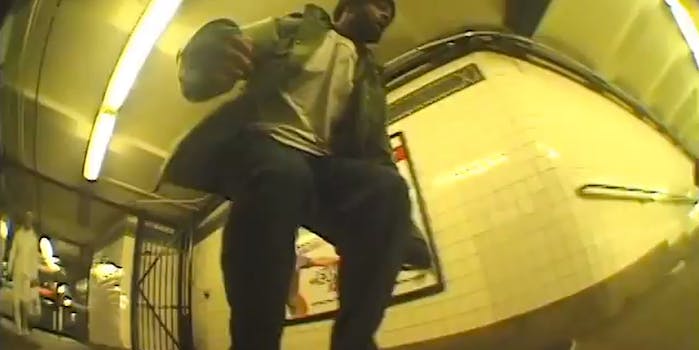 Dude, that stunt at the end could actually kill you.

The world may be someone’s oyster, but these guys are okay with having the New York subway system as their playground.

We first saw footage of subway skating back in 2011 (along with a now-famous photo of a skateboarder clearing the subway tracks). It was part of Mandible Claw’s video shoot for Tengu: God of Mischief, and the footage then made us gasp and wonder how they didn’t get arrested.

“We waited till about 5 a.m. to get this trick but it was worth it,” Colin Read, who directed the video, wrote at the time. “I wasn’t sure Koki was going to do it when we went down, but after a few run ups he landed it first try.”

After a few years of patiently waiting, Read finally released the video of that subway shoot, and boy is it a doozy.

It’s illegal to even stand on a skateboard on a subway platform, let alone ride it, but the dozen or so skateboarders pull off tricks, speed down the walkways, and even jump across the tracks.

And that shot of Koki? He didn’t make that jump the first time, but what might be even more impressive is that he managed to avoid a potentially life-threatening rail.