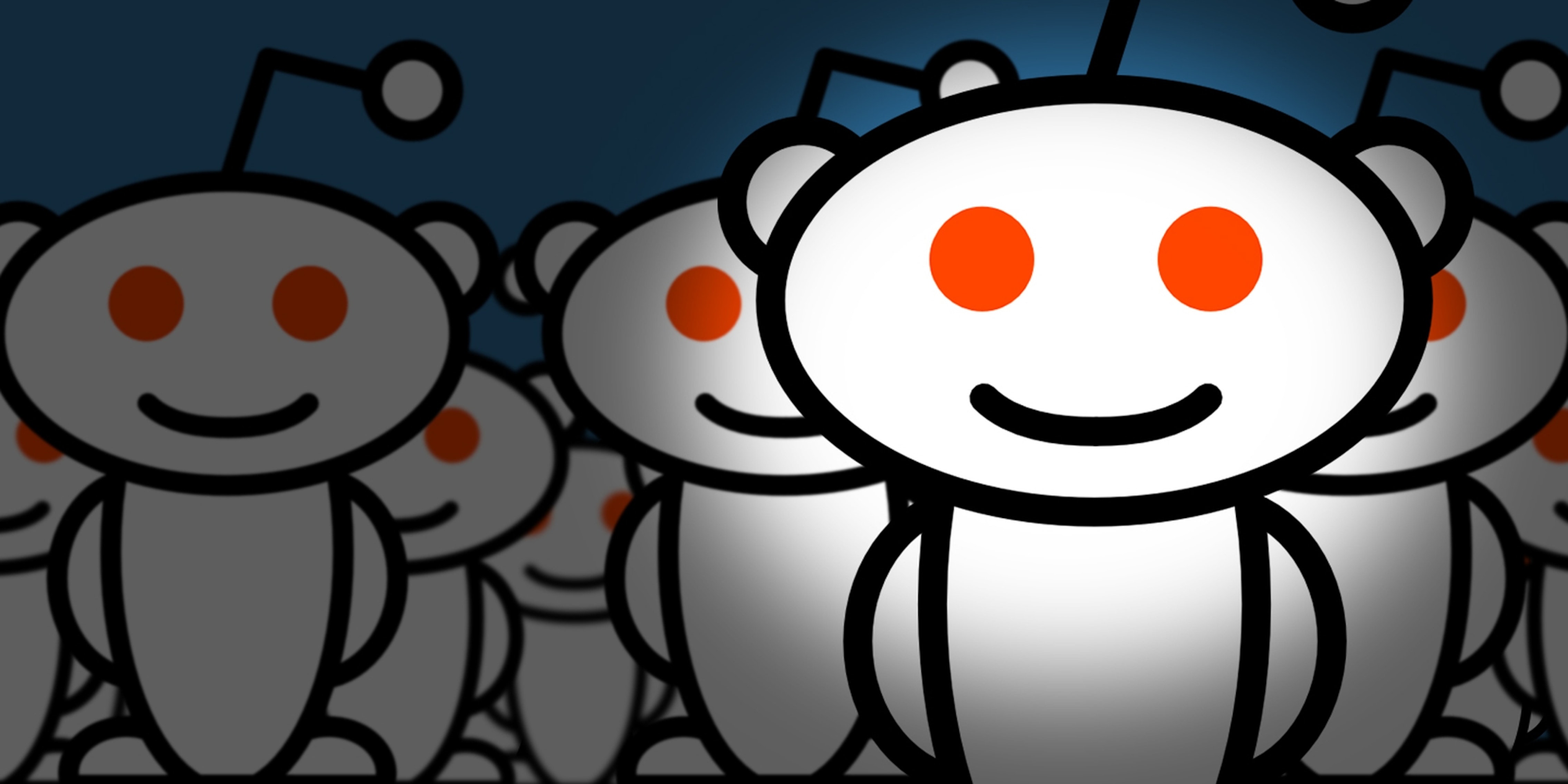 Introducing a moderator cap has had the result of making the site even more palatable to new visitors.

Sometime in mid-2011, Reddit started hiring more aggressively than it had done in the past, steadily enlarging its stable of programmers. Since then, the popular social news site has released a stream of updates, many as part of a clever strategy to attract paid subscribers with early access to new features before they’re rolled out to the general populace.

Not all changes have been so visible, though. In particular, a recent change to the policy that governs moderation in the site’s most popular subreddits went largely unannounced and almost entirely unnoticed by ordinary users. Under the new rule, no single user is allowed to moderate more than three default subreddits, and several moderators have since been made to decide which commitments they’ll keep and which they’ll give up.

Insofar as it stands to deprive moderators of positions in subreddits they’ve worked hard to grow, it’s a rule that turns success into a potential liability. 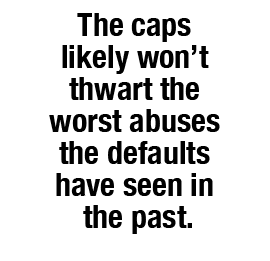 At Reddit’s core is its ranking algorithm, which calculates votes, factors in time, and spits out a popularity-ordered list of what’s hottest at that very moment. It’s a system that works fine when you’re dealing with a few hundred links each day. But as the site grew from a few thousand users to hundreds of thousands, it was clear the algorithm’s usefulness would be limited without a way to categorize the sheer volume of links pouring in everyday.

Early on, the administrators tweaked the site to let users create subreddits for almost any topic that interests them—from politics to pocket sand to showerbeer—with each new subreddit hosting its own playfield for submissions. At the same time, Reddit also handed the task of policing most of those new subreddits to a veritable army of volunteer moderators. Those moderators are responsible for ensuring that their subreddit’s users follow the rules of the site. In exchange, they receive broad latitude in determining the direction of the subreddits they moderate, from altering its visual scheme to drafting their own rules.

That ends up being a substantial amount of influence in some cases, and nowhere more so than in the default set. Those are the subreddits to which each user is automatically subscribed when they create a new account. The constant influx of new users has built the default subreddits into the powerhouses of the site, commanding huge audiences and dominating the site’s front page even for visitors who have never bother logging in.

They drive so much traffic, in fact, that even changes made to a recently demoted default like the politics subreddit can stir outsized controversy. It probably does not overstate the case to suggest that some online publishers could hardly operate at the scale they do without these subreddits. It’s a circumstance that makes the defaults ripe for abuse, as when the owner of a popular meme-sharing site was discovered using his moderator position to promote his own site at the expense of competitors. 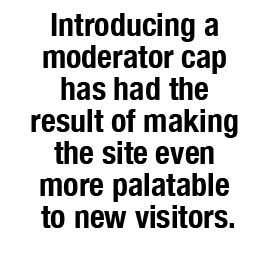 It should be easy to see, then, that administrators have every reason for policing moderators—especially at the default level, which is virtually the only level visible to Reddit’s millions of casual visitors. Add to all this a general distrust of moderators (particularly in the defaults, where grumbles about a cadre of “power-users” inhabiting moderator positions are a near-constant feature) and you’d expect news of a moderator cap to be hailed with near unanimous acclaim.

It’s curious, then, that the administrators were so quiet about unveiling the new policy. There was no hint of it in the usual channels: on the site’s blog, in the long-dormant announcements subreddit, or even in the subreddit the administrators use for moderator news. The affected moderators were reportedly informed via private messages, and related discussions were held in a private subreddit, closed off from prying eyes. Only recently has word of the change gained outside notice in a Theory of Reddit thread, after one of the most popular subreddits, r/WTF, voluntarily withdrew its default status in order to retain several of its most helpful moderators.

That, presumably, was not the result the administrators had in mind. In the Theory of Reddit thread (which is, to date, the source for most publicly known information about the rule—like the fact that one particularly busy moderator was granted an exception) some users suggested the intent of the rule was to limit the potential for collusion among the site’s most active subreddits.

On that premise, overextended moderators were supposed to step down, not remove their subreddit from the list.

In the case of r/WTF, though, it may be all the same to the administrators. Earlier this year, when two of the site’s most contentious communities were removed from the default set, there was some speculation that the administrators had quietly changed the criteria by which subreddits appeared in the default set. Hadn’t unique visitors previously been the primary determining factor? Yet, the official reason given for removing r/politics and r/atheism was that “they just weren’t up to snuff.”

The vagueness of that explanation led some to suppose that the administrators had set out to clean up the front page by putting divisive content at a disadvantage. If so, then the loss of r/WTF—where NSFW material often thrives—is unlikely to move the administrators. So far, introducing a moderator cap has had the result of making the site even more palatable to new visitors.

While that may not have been why the administrators imposed the moderator cap, it is of a piece with the overall effect of the rule. To understand how, consider the scope of the policy. According to Stattit, which tracks subreddit demographics, there are thousands of Reddit users who each moderate more than three subreddits—some as many as 200. Because only a small minority of those subreddits is defaults, whatever misuse the cap was meant to curb is still possible in the thousands not covered by the rule.

What the cap really does, then—what it was apparently intended to do—is limit to any one user or group of users the tools that make it possible to influence the tone or direction of the default set. That, in turn, ensures that the administrators will face fewer concerted challenges when they make changes geared toward putting Reddit’s best face forward. 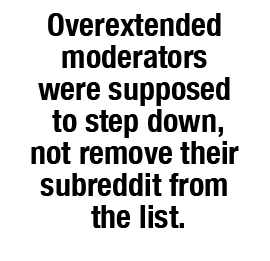 That’s presumably what Reddit tried to do by promoting subreddits like r/books and r/explainlikeimfive to the default set, even while it removed more active but contentious competitors for those slots.

The caps likely won’t thwart the worst abuses the defaults have seen in the past—most of which have involved single players infiltrating the ranks of only one or two of the defaults. It may, however, dissolve the like-minded cadres that tend to accumulate in the most critical moderator positions over time. In principle, that could lead to more diversity in how the defaults operate and lower the odds that any particular bias will predominate.

It also gives the moderators a mechanism for breaking up the monopolies that arose when a handful of motivated users created the most obvious subreddits when the capability was first introduced. Some of those early adopters have been sitting on top moderator positions for years, often staying just active enough to keep from getting deposed.

What’s lost, though, is some portion of the premise that Reddit is an engine for creating user-owned communities. So long as they abide by the site’s newly revamped user agreement, users are free to build communities any way they’d like—right up until those communities become defaults. That’s the point at which the “free market” in subreddits is made subject to the presumed needs of the site. A user savvy enough to create four quickly growing subreddits must ultimately face a hard decision: either cede one of those communities to someone else’s vision or forfeit the opportunity to grow it to its full potential.

Already, some moderators are discussing the possibility of a strike, but on a site with thousands of users willing to fill their shoes, any protest that involves divesting themselves of responsibility is bound to fail. After all, if the rule change demonstrates anything, it’s that the administrators are willing see default moderators as an interchangeable commodity.

It’s here the r/WTF can set an example for other moderators. The new rule may prevent moderators from encroaching on the administrators’ prerogative for the front page, but it stops short of obligating them to contribute to it. So long as moderators retain their positions, they have the option of withholding their subreddits from the default set.

So while the administrators may have been none too sorry to see r/WTF step down, they continue to rely on popular communities to set the tone for the site. If enough default subreddits were to drop out, the community at large would have little choice but to take notice. Indeed, for moderators who have worked long and hard to make their subreddits valuable enough to attain it, default status may be the only bargaining chip they have left.