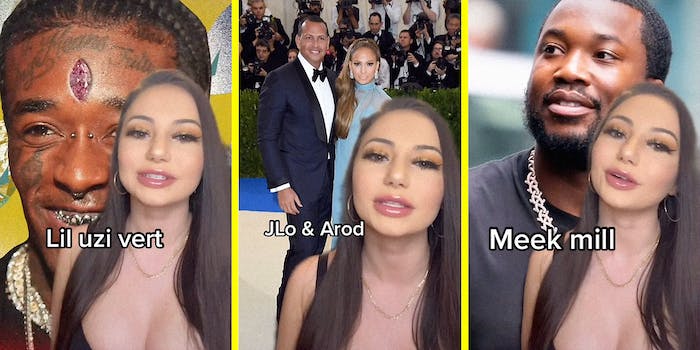 Stripper reveals which celebs are bad tippers on TikTok

We’ve learned about celebrity restaurant behavior and tipping etiquette from TikTok, and now there’s some new input from the stripper community.

After shouting out Drake, Usher, and Rae Sremmurd as good tippers, DiMeo, who says she’s been a dancer for “a little over six years” at clubs across the country, gets to the dirt. Jennifer Lopez and Alex Rodriguez allegedly came in before Lopez was set to film Hustlers, got a room with a dancer, and didn’t tip her, though DiMeo suggests Lopez might have just been there to “learn about strippers.”

Meek Mill allegedly didn’t even tip the waitress serving him food, a pre-fame Lil Uzi Vert boasted that he was going to be big but didn’t spend money, and the Baltimore Ravens left without spending any money and were “super aggressive.”

Stripper TikTok—or StripTok—is a vibrant community, but it also functions as quality control. In December, one of TikTok’s most popular strippers was accused of making up her wild viral stories and pushing harmful narratives about dancers and sex workers.

DiMeo’s posts are more informative: She previously posted pro tips for patrons—don’t throw money at dancers like an asshole—and resources for those looking to get into dancing. One of her most viral TikToks is a response to the question, “Why are you a skripper?”