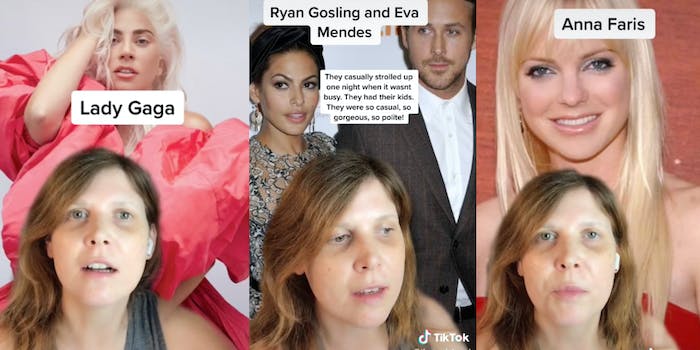 'I wanted to like them but they were SO RUDE.'

Every celebrity is at risk of becoming the subject of a viral TikTok video at one point or another, especially when the creators of said videos are workers who have serviced them.

A TikToker, Annie Bond, who was a waitress at a “busy Los Angeles restaurant for five years,” posted a video on Monday revealing how celebrities like Lady Gaga and Anna Faris treated her while she was their server.

“So let’s rate all the celebrities I’ve waited on,” Bond begins.

Bond gives Lady Gaga a 5 million out of 10 because “she remembered everybody’s names. She always looked flawless. She’s extremely nice. She’s a goddess.”

Faris likewise received a high score. “Anna Faris is the kindest, most wonderful person alive. I wish she was my best friend. She was so nice, just so unbelievably nice.” And for that, Faris received a 20 out of 10.

And what about Eva Mendes and Ryan Gosling? The TikToker rates the couple an 11 out of 10, owing to how polite they were. “Ryan Gosling and Eva Mendes like casually strolled up one night when it wasn’t that busy, and they had their kids, and they were so casual, and so gorgeous, and so polite. … I would like to be in their marriage,” Bond says.

The next “hot celebrity couple” didn’t receive a similarly glowing review. “Judd Apatow and Leslie Mann, who I wanted to like so much, but they were so rude,” she says. But Bond wants to give them the benefit of the doubt. “Maybe they were just having a bad day?” she adds. “So, one out of 10.”

Bond ends her video by revealing that a “part 2” may be on the way because “there’s so many more.”

In “part 2,” which was posted on Tuesday night, the TikToker rates celebrities like Keanu Reeves and Drew Barrymore, both of whom received high ratings. Reeves, Bond says, ordered “a dozen oysters to himself, like it’s a casual thing to do.”

“He was so polite, so humble, paid for the (table’s) whole bill, tipped super well,” she says. “One hundred percent would die for Keanu reeves.”

Drake, on the other hand, received a mediocre rating of six out of 10 for just being “fine.” “He drank rosé on ice. He ate a kale salad. He was fine,” she says.

Depending on who their faves are, viewers are either feeling validated or heartbroken by the information and are dropping requests on who they think the TikToker should expose next. “I just love how many people keep confirming how great Lady Gaga is to people,” one said.

“Never heard anyone say a bad thing about Keanu. He’s the (goat) of being the nicest celebrity,” another commented.

“Noooo not judd and leslie,” a third said.

Workers revealing just how cheap, generous, rude, or nice celebrity favorites are on TikTok is not a new phenomenon. Kylie Jenner was exposed by a restaurant hostess back in July of 2020 for allegedly only tipping $20 on a $500 bill. And more recently, Anna Kendrick was called an “evil chick” by a celebrity stylist.