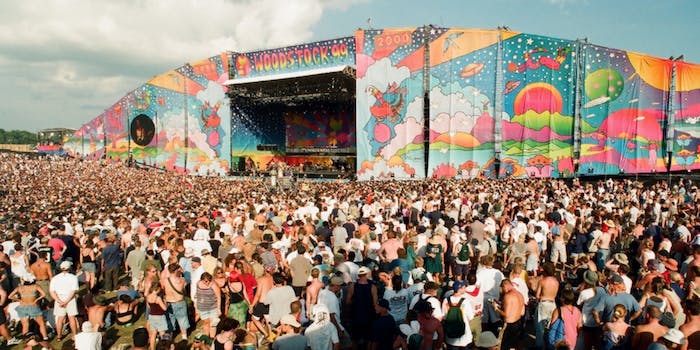 This week in streaming: Revisiting Woodstock 99

What does HBO’s Woodstock 99 doc really show us?

“The ’99 Woodstock just seemed like it was trying to relive a nostalgic moment,” says singer Jewel in Woodstock 99: Peace, Love, and Rage. “Along with commercialism and kind of capitalizing and trying to maximize profit, but not having a real soulful purpose for the show.”

Jewel, one of only three women booked on Woodstock 99, comes closest to nailing the zeitgeist in this new documentary, which is part of HBO Max’s Music Box series. Director Garret Price tries to figure out what went wrong across three days in July 1999, and he certainly gets insight from his interview subjects. There are some truly prophetic events, like candles for an anti-gun vigil being turned into kindling for widespread fires. But there’s a cognitive dissonance to much of it.

The doc attempts to reckon with the misogyny of the time and the sexual assaults that took place at Woodstock 99, and there’s an uncomfortable amount of archival footage of women being groped and harassed, but little insight from women who were actually there. The festival’s co-promoter, John Scher, comes off the worst, essentially blaming women for their assaults and trying to downplay the violence. (He also blames Fred Durst for inciting a crowd that specifically came to see Limp Bizkit play “Break Stuff.”)

Chrissy Gorman briefly appears in the documentary; there’s footage of her being interviewed because she has “Show us your dick” written in red on her chest, a response to all the men screaming (and holding signs that said) “Show us your tits.”

Gorman tells the Daily Dot she was “shocked” to spot herself in the doc, though “to be seen in a Woodstock documentary for standing up to sexism isn’t exactly a bad thing in my opinion.”

The doc is also missing more insight from the vendors and volunteers who worked the fest. Earlier this week, comedian Sara Benincasa tweeted about working crisis intervention at Woodstock 99 when she was 18 and living in New Jersey. She tells the Daily Dot she picked up the volunteer gig because she was first aid and CPR-certified.

“It was run by social workers,” she says, “not by disorganized concert promoters, so you had a lot of people there who were genuinely excited about it. Obviously, what happened on the ground was a huge failure of security and organization. But I remember the first aid volunteers being lovely. The drunk ambulance workers who kept me up at night partying? Not so much.”

She says she “met some incredible people there who were really committed to wonderful charities and volunteer organizations.” But she also remembers hearing about assaults.

“I heard that four rapes were reported the first evening,” Benincasa says. “I don’t know if that was actually true or not. I remember seeing men lined up on both sides of a particular area jeering at women as they walked through. It was scary to behold.”

There’s no simple answer for what happened at Woodstock 99 but it isn’t unique to July 1999. (Many people immediately drew a line to Jan. 6.) Perhaps with more voices (or if it were a three or four-part series) it wouldn’t seem so lopsided. Gorman shared an anecdote that could have made a great addition to the doc: “Show us your dick” stayed with her, quite literally.

“I had gotten severely sunburned at that show, and so the body paint was basically burned into my skin,” she says. “Eventually, it did wash off. However, for about three or four years post-Woodstock 99, every time I had a sunburn or even a slight tan on the area, those words would illuminate in pure white.”

Use Shopify to build your own online store

If the pandemic helped you discover that working at home is your jam, you’re not alone. The good news is that’s a very viable thing, especially if you have an ecommerce business in mind. Building your own online store is easier than ever and Shopify can help you to get the job done. Learn how to build and customize using Liquid, the site’s templating language, in just a few hours.

Now you can watch the money roll in while you eat chips in your pajamas. Living the dream, right?

Ted Lasso is thoughtful and delightful in season 2

It would be so easy for Ted Lasso—which became Apple TV+’s most unlikely success story last year after it turned into a genuine word-of-mouth hit at a time when people were searching for comfort watches—to play it safe.

What Ted Lasso realized is that the original premise wouldn’t work forever; Ted Lasso’s folksy optimism loses a tiny bit of its charm when there’s no conflict, and we even see a bit of this play out in the season 2 premiere. Instead, what Ted Lasso does is peel back that sheen of its cheerful exterior to make us examine the limits of that optimism. As a result, it’s thoughtful and existential but no less of a delight.

Now Playing: “Freedom” by Rage Against the Machine (Woodstock 99)