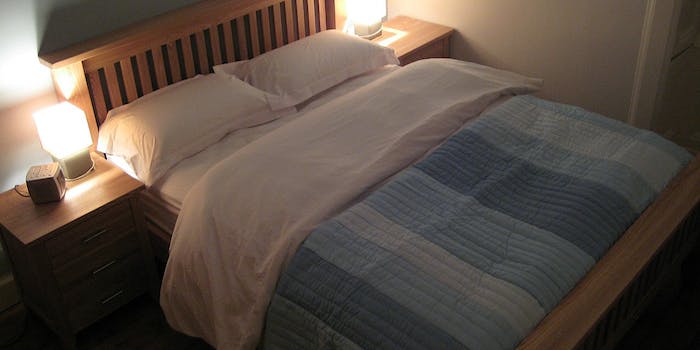 Dude who finds stranger sleeping in his bed is surprisingly chill

The bed's rightful owner couldn't have been nicer about it.

It’s rarely advisable to fall asleep in somebody else’s bed if you don’t have his or her explicit permission. But if you do get confused and fall asleep there, and your unwilling host gently rouses you and asks you to leave the premises, it’s almost never a good idea to flat-out refuse and try to go back to sleep.

At best, you might catch a beating. At worst, you’ll probably have the opportunity to finish your slumber in a local jail cell.

But the dude in the video below didn’t seem to care about those consequences. He was confused, he fell asleep, and he declined the invitation to skedaddle. Here’s what happened next.

Props to the bed’s rightful owner for not flipping out at the stranger for, you know, sleeping in his bed. And, you know what, props to stranger, too, for sticking to his convictions that he was actually in his own bed (he paid taxes on that, you know).

At one point in his life, the stranger might have been right, since he claimed that this was actually his old house and not his current house.

Anyway, it all ended well. The host offered the confused gentleman a place to crash, and they seemed to part as friends. There might be weirder ways to begin a friendship, but I’m not sure what they are.