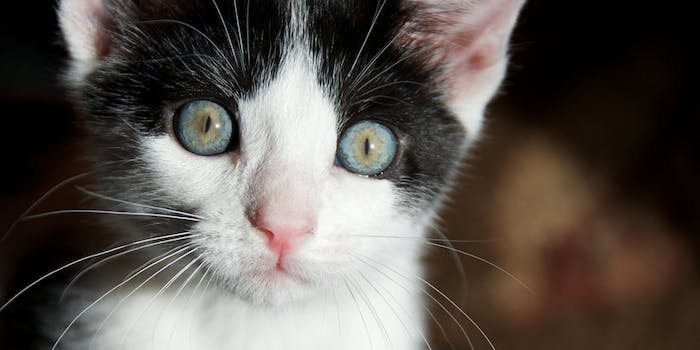 Every time you slut-shame a woman on the Internet, God kills a kitten

Think of the kittens.

Earlier this week, a video surfaced on the Internet of a female British tourist giving oral sex to more than 24 men in a bar in Magaluf, a popular resort town off the Spanish coast. In the (obviously NSFW) video, the woman fellates the men in quick succession in exchange for a free bottle of Cava, a practice known as “mamading” (“mamada” is Spanish for oral sex). You can hear the DJ at the bar encouraging her as LMFAO plays in the background. The woman’s face is one of the few visible in the frame.

Since the video leaked, it’s sparked outrage from the mayor of Magaluf, who has publicly decried “mamading” and warned bar owners that anyone caught encouraging the practice will be arrested. It’s also horrified the U.S. media: Gawker and Buzzfeed both posted about it––with the latter publication referred to the video as “shocking.” But what is far more shocking than the video itself is the apoplectic, pearl-clutching response on Facebook and Twitter:

So a girl in #Magaluf blew 20 something lads for a one free drink.. ONE FREE DRINK 😂 someone get her to an std clinic ASAP

The British girl, who performed sexual acts on 24 men in Magaluf, clearly has no shame, no dignity, no self respect and no morals #trash

The video of the girl in Magaluf… Erm, is this what it has come too to get a free drink #sickening 😳😷

Bet that magaluf girl’s parents are so proud 😳😷 #classy #boke

Watching what is now being referred to as the “Magaluf Girl” video is undeniably perturbing. Even the most sex-positive among us would be hard-pressed to deny that there’s very little that seems empowering, on face value, about a woman fellating a string of strangers on the dance floor for a 3 Euro bottle of sparkling Spanish wine. (Given where she was at the time, there’s also more than a slight possibility that she was inebriated in the tape, thus introducing the even more disturbing issue of consent.)

But what is even more disturbing than the “Magaluf Girl” video is how quick everyone on the Internet has been to slut-shame her for her actions. All the pearl-clutching and handkerchief-waving over the incident, it seems, is directed at her. Not the man holding the camera. Not the 24 men standing around the dance floor, who don’t exactly look like they’re being coerced into getting their penises sucked by an attractive blonde woman. Not the DJ who can be heard cheering her on in the background, or the bar’s owner, or the Spanish resort town bar culture that encourages such a horrendously sexist, objectifying practice to take root to begin with. (“Mamading” for free drinks is apparently relatively common in Magaluf).

Of course, it’s not so surprising that the Magaluf Girl is shouldering all the blame for the incident. (It is also not surprising that according to Reddit, 4chan has already outed her, as well as her father and brother.)

In a world where women are told to stop drinking at parties to avoid being sexually assaulted, where teenage girls watch their rapists go free because they happened to be wearing a short skirt at the time, a drunk girl at a bar makes an easy target for slut-shaming. Better to call her a whore than muster up the same level of rage for the 24 men who share the screen with her––or even empathy for the girl whose drunken actions, caught on tape, may have ruined her life permanently.

But what’s even harder than having empathy for the Magaluf Girl is acknowledging the possibility that maybe, just maybe, she doesn’t need our empathy. Maybe she was totally in control of the situation, and maybe she was totally sober. (There are certainly stranger and less common fetishes out there than wanting a crowd to cheer you on while you’re having sex.) Maybe she got off on the attention, the dizzying rush of being down on her knees and having all eyes on her while LMFAO blared in the background. Maybe she got off on the degradation of being down on her knees and knowing that her sexual favors were only worth three Euros.

This is all just speculation––these are all just possibilities. But the point is: we don’t know what was in that girl’s head and the heart at the time, and for that reason, we are in no position to judge her for her actions. We can perhaps judge her for her lack of foresight, or the fact that she broke the law (public sex is illegal in Spain), or her terrible taste in side-boob-revealing clubwear, but we cannot call her a slut or a whore or a tramp, unless we call the other 24 men in that video sluts and whores and tramps, too.

In the discussion of the Magaluf Girl, a lot of people on Twitter have been talking about what her parents are thinking about their daughter in the video:

That video of that bird in magaluf is awful, feel sorry for her parents

That girl in that Magaluf video is going to have some seriously proud parents to come home too.. 👀 #Dirt

That video of that girl in magaluf is mental 😱 imagine her parents see that! #slag #donethemproud

I can’t speak for the Magaluf Girl (though I wish I could refer to her as something more humanizing than that), but I know how I would feel if I were her parent, and it would not be “shame” at the fact that my daughter was a “slag.” Frankly, my heart would break for her, and my head would fill with blood and my fists with fire for the men who exposed her in such a sleazy, humiliating fashion. But most of all, I would hope against hope that she wouldn’t spend the rest of her life regretting what happened on that tape.

Unfortunately, she probably will. But thanks to the incredibly vicious and slut-shaming bile people are spewing on the Internet right now, it won’t be for the right reasons.