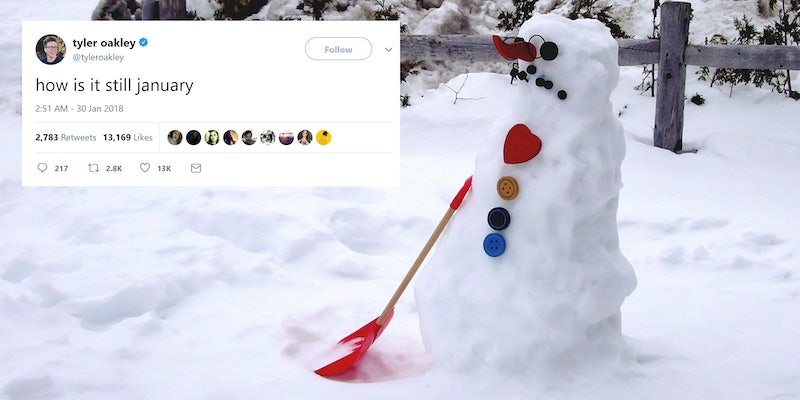 Everyone wants to know: ‘How is it still January?’

January 2018 is nearly over, and for most people on the internet, it can’t happen soon enough. The month was 31 days long, just like it always is, but a lot of people thought that it felt much longer.

Just look at these tweets from the past week:

how is it still january

HOW IS IT STILL JANUARY

We six months into 2018 and it’s still January.

One man was even worried he was trapped in some sort of alternate reality.

Other people were just as incredulous that someone would question the concept of linear time.

Bc the month of January has 31 days and today was only the 29th so therefore it is still January. Jeez Tyler i thought you were smarter…..

Maybe the month felt long because we had five Mondays.

To be fair, January is also typically the coldest month of the year, and this one has been particularly frigid, so people are probably just feeling slightly stir crazy at this point.

Also, there’s a little something phycologists call “perceived duration,” in which the amount of time between events can vary wildly for any two individuals. In general, boring or painful moments seem to last longer than exciting or joyful ones.

Then again, maybe the month of January just has the ability to warp spacetime.

In any case, people are ready for February—which has only 28 days this year.

Tomorrow is finally February 1st.. it feels like tomorrow should be 2019 the way January was…