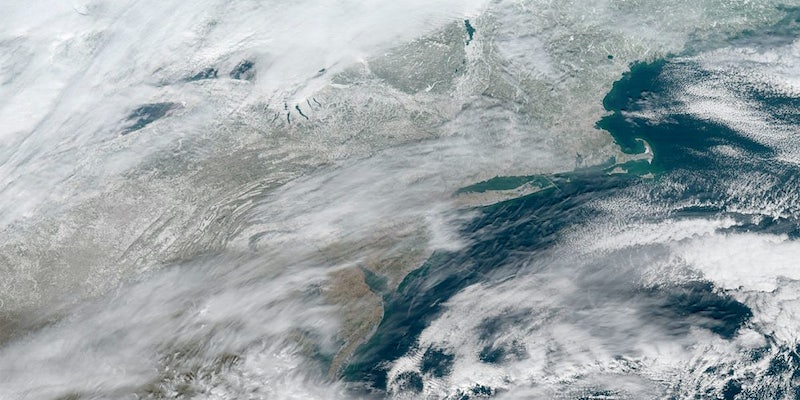 A ‘bomb cyclone’ is hitting the East Coast, and the internet is scared

The East Coast experienced unusually cold temperatures the last week of December, and conditions are projected to only get worse during the first week of January. Yesterday, after everyone began recovering from the holidays and heading back to work, weather reports said a storm is heading for the region. Should we all be worried? Well, forecasters are calling it a “bomb cyclone,” which definitely doesn’t sound scary. Nope, not at all. Just the words bomb and cyclone put together.

All day Thursday meteorologists are going to be glued to the new GOES-East satellite watching a truly amazing extratopical "bomb" cyclone off New England coast. It will be massive — fill up entire Western Atlantic off U.S. East Coast. Pressure as low as Sandy & hurricane winds pic.twitter.com/6M4S3y75wT

A monster storm is headed for the East Coast, but don't worry, it's only expected to become a [squints at notes] "bomb cyclone" https://t.co/tLjbbRCQiD

Reading “bomb cyclone” in headlines unsurprisingly caused many people to freak out. Other people joked about it.

"Bomb Cyclone" is clearly the name of a Jaeger and I can't believe Guillermo del Toro is going to kill us all as part of a viral marketing campaign after we said so many nice things about the sex fish movie.

Forecasters have previously used the term “bomb cyclone” to describe a system that rapidly drops in pressure. That definition doesn’t sound as scary as the actual term. It’s just a winter storm, right? We’ll find out tomorrow.