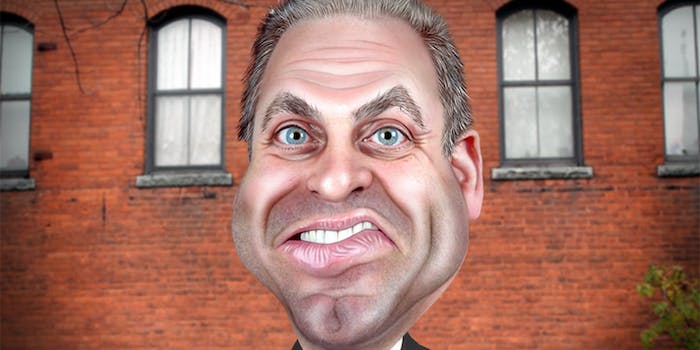 If you want to avoid speaking at a racist conference, look it up on the Internet first.

You may not have heard of Steve Scalise, but that’s about to change. The Louisiana Republican was just elected to the position of House Majority Whip, but that’s not why he’s hitting the news this week: A story that he spoke at a 2002 white supremacist convention is surfacing, and it’s not looking good for his office—or the GOP. Even as he hotly denies knowing anything about the group’s mission when he committed to speaking, conservative Republicans are confused about why he would have chosen to speak at an event so transparently linked to neo-Nazis, and the rest of us are left wondering why not a single Scalise staffer could use Google.

Let’s take a little trip back in the time machine, to 2002 and the European-American Unity and Rights Organization (EURO) conference, held in New Orleans. EURO is headed by David Duke, former Grand Wizard of the Ku Klux Klan, and according to the Southern Poverty Law Center, the group “claims to fight for ‘White Civil Rights’ for ‘European and Americans Wherever They May Live.'” The SPLC continues, “Beyond hosting a website, whitecivilrights.com, and staging an occasional conference, EURO is a paper tiger, serving primarily as a vehicle to publicize Duke’s writing and sell his books.” Duke once sat in the Louisiana House and attempted a presidential run among some less ambitious political ventures.

The convention was no small matter; indeed, Scalise would almost to have had to go out of his way to avoid news about it and information about EURO. Earlier in the year, EURO had attracted attention for racist activity in several Southern states, and the conference was controversial enough that it was “scaled down,” the Iowa Cubs (Chicago’s minor league team) backed out of an agreement to stay at the hotel hosting the event, and even the hotel wasn’t pleased to find out exactly what would be happening within its walls.

After 2002’s May conference, Duke was actually imprisoned for approximately a year and a half for defrauding his followers, emerging triumphant with the support of other white supremacists who sympathized with his time spent in “the gulag.” Well before then, however, he was a well-known white supremacist and neo-Nazi, as were his associates.

When Scalise, then a sitting member of the Louisiana House himself, was invited to speak at the conference, he must have been aware of the implications from the title alone. In fact, reports from Stormfront, a neo-Nazi website (and the source of information about his attendance at the conference), indicate that some of his comments at the conference were racially charged: Not only did he know what the conference was about, but he played to his audience.

In the wake of the event, Scalise moved quickly through Louisiana politics, taking a Congressional seat in 2008, and the story likely would have remained buried if he hadn’t been elected majority whip. Unfortunately for him, almost as soon as the election was over, bloggers with good Googling fingers and curiosity about who would be leading the party set to work, and they announced the story with glee over the weekend. Hell hath no fury like a blogger determined to root out political dirt.

As the news broke, Scalise vigorously protested that he never would have appeared at an event sponsored by neo-Nazis and that he had no idea about the nature of the conference, and his claims just got more complicated as Monday wore on. It wasn’t enough to claim that he didn’t know what the conference was about; he insisted that he was appearing almost anywhere that invited him at the time so he could discuss tax policy, and he said he was understaffed and couldn’t vet events properly. Meanwhile, staffers and supporters hit their email clients and the phones in an attempt to convince journalists that he was just a naive politician back in 2002.

One thing he couldn’t seem to do on Monday was stand up and admit that he’d made an honest mistake by speaking at a conference geared at individuals with extreme racist views. Scalise could have said that his views on racial issues had shifted dramatically since 2002, which would be entirely plausible. A lot can happen in 12 years. His refusal to be honest reflects poorly on him, and while it’s no doubt an attempt to dodge responsibility and keep his position in the GOP, he may be in for a surprise, as Nia-Malika Henderson points out in the Washington Post:

With Scalise in leadership, the GOP will keep having to answer questions about him. They will keep having to explain how he ended up at an event for neo-Nazis.  And even if the story blows over, the GOP is still left with their perception problem,with Scalise as pretty good fuel. It’s quite a tight rope for the GOP and in the end, the downside of keeping Scalise could outweigh the upside.

The Congressional Black Caucus has already asked for an investigation, indicating that the GOP may have a live grenade in its hands. Republicans may be faced with a choice between supporting their fellow politician and backing down, throwing him to the wolves in the interest of avoiding an explosive political controversy right after the election. News that a Republican had addressed a white supremacist group at any time would look bad, but it’s particularly problematic in the context of a nation sitting on top of a racial tinderbox thanks to police violence and the deaths of Michael Brown, Tamir Rice, and Eric Garner.

Aside from the fact that his appearance makes him look absolutely terrible, though, it raises the inevitable and obvious question that’s already springing to the lips of thousands of millennials: Didn’t any of his staffers know how to Google? Even the most casual search would turn up a slew of information about EURO, none of it particularly complimentary, even in 2002, when neo-Nazis didn’t have the same lively web presence they do today.

Furthermore, even if his staffers (or singular staffer, as Scalise claims he was reduced to at the time) hadn’t looked up EURO, they could have done the same with David Duke and been plunged into a rabbit hole of racism, conspiracy theories, and Ku Klux Klan affiliations. Any one of those things would be a glaring red flag that Scalise would perhaps want to stay far, far away from, but all three might as well be a political fireworks show for a party of one.

It stretches the boundaries of credibility to genuinely believe that Scalise was entirely unaware of EURO’s purpose and Duke’s past and affiliations. That leaves only one possibility: He, along with his staffers, knew about the organization’s nature and just didn’t care. Was he eager to get an opportunity to cover tax policy in any setting, even if it was a white supremacist conference? Did he support the views of EURO to some degree? Damningly, in 1999, he actually expressed support for Duke’s views.

His motivations are unclear, but whatever the reason for his appearance, he’s surely regretting it now, as it may just be the torpedo in his political career. It’s certainly a sharp reminder and a lesson to other politicians: Always remember to pull up a browser and pop something into Google just to see what comes up before you ink an appearance contract.