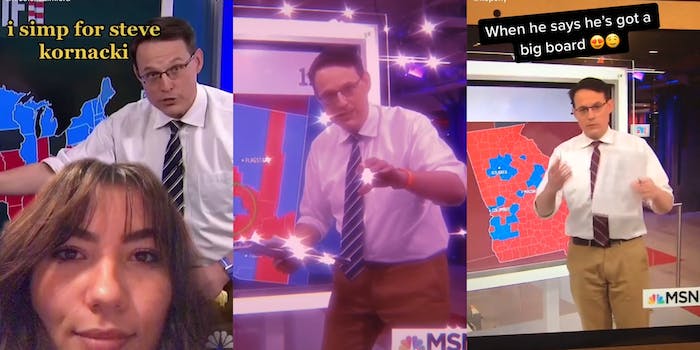 This election, the tide seems to have turned against online analysts like Nate Silver. This week, MSNBC’s Steve Kornacki became a guiding light through the noise and uncertainty, and TikTok especially is smitten.

Starting on election night, the Kornacki thirst memes spread quickly on Twitter but over on TikTok, young people were working through their feelings too, in the form of fan edits, fan fiction, and Kornacki cosplay.

Someone edited a to include Kornacki in front of his big board. And then there was in-depth analysis of his “dumptruck.”

While CNN’s John King also got some fan edits, the map-guy love was part of a bigger wave of hopefulness on TikTok. On election night, young people attempted to manifest states flipping blue, and watching election results come in on TikTok gave Gen Z users (some of whom weren’t old enough to vote in this election) a sense of control on their turf.

That means the blue-flipping of Georgia was celebrated with memes, and Stacey Abrams was given her own fan cams.

As for Kornacki, he’s still going, even as the internet begged him to take a break. The stamina! The reference to USA’s Up All Night that clearly shows Kornacki (who’s 41) is a late Gen X-er!