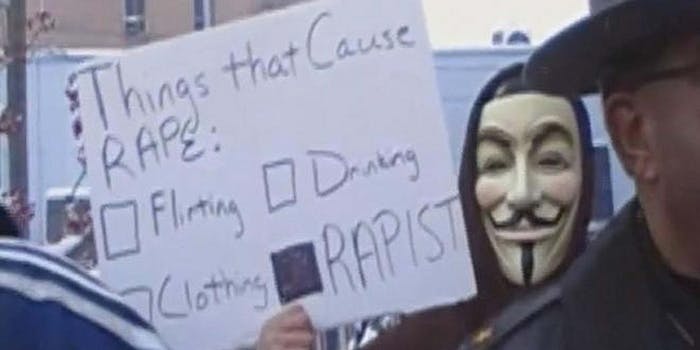 Deric Lostutter is being charged under the "Draconian" Computer Fraud and Abuse Act, the same law used to bring charges against Aaron Swartz.

His reward? Getting raided by the FBI and facing possible charges for hacking.

To provide help with Lostutter’s defense, a group of supporters has launched a fundraising effort which has already made over $50,000. The goal is 10 times that much, in the event of an all-out legal fight.

Lostutter’s attorney, the Whistleblower Defense League’s Jason Flores-Williams, has said the government plans to charge his client “on alleged felony violations of the Computer Fraud and Abuse Act,” (CFAA) according to the Huffington Post. These include aggravated identity theft, computer crimes, and conspiracy.

“[Lostutter] is charged with hacking for the benefit of Anonymous,” the organizers of the fund raising effort wrote on their page. “He is alleged to have done so to shed light on the rape culture present in Steubenville, Ohio. If it is true that he committed these acts, his heroism brought national attention to a culture of victimization and abuse.”

The legality of things and their moral rightness are not always exactly matched. One can do a bad thing for a good reason but it doesn’t mean the bad thing itself becomes good.

But the CFAA has been accused of being overly broad, carrying disproportionate penalties for rather minor infractions. Its use as a threat mechanism may played a role in Aaron Swartz’s suicide, after the Reddit cofounder and digital rights activists was charged with felony hacking for breaking a website’s terms of service.

Rep. Zoe Lofgren even introduced a bill, Aaron’s Law, to amend the CFAA, though it has been rewritten by opponents and turned into an “even more Draconian version” of itself.

With the law under this much public scrutiny, any court deciding to prosecute Lostutter would be well advised to treat it with extreme care.