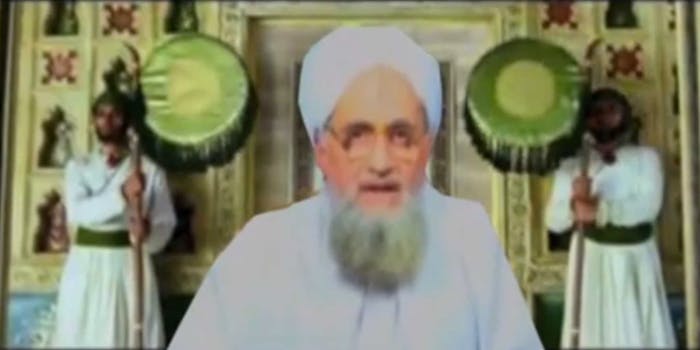 A comedic overdub of a speech by al-Qaeda leader Ayman al-Zawahiri didn't make the State Department many new friends.

There’s an old saying in the entertainment industry: “Dying is easy. Comedy is hard.” Never has that phrase seemed more apt than in describing the U.S. government’s latest attempt to counter Islamic extremism online.

Recently the State Department put out a YouTube video satirizing those familiar al-Qaeda propaganda tapes. Released in May, the video features actual al-Qaeda leader Ayman al-Zawahiri. However, the audio has been replaced by the voice of an Arabic speaker working on behalf of the State Department.

In the overdubbed message, translated by the Washington Post, al-Zawahiri speaks about the conflict in Syria and, thanks to a series of comedic Freudian slips, compares other al-Qaeda leaders to that country’s authoritarian ruler, Bashar al-Assad.

Throughout the above video, the State Department lampoons Islamist extremists by having al-Zawahiri inadvertently refer to jihadists as killers, and accidently label rival al-Qaeda leaders in the Syrian conflict as “thugs” and “oppressors.”

Having the U.S. government release a video like this may seem odd, but it’s actually par for the course for the State Department’s Digital Outreach Team. For years, the outreach team has sought to use the Internet to combat the propaganda of Islamic extremist who heavily lean on the Internet for recruitment.

According to the Associated Press, this specialized team consists of 50 native Arabic, Punjabi, Somali and Urdu speakers. The program has been around since the George W. Bush administration, starting with 10 team members in 2006. But it has blossomed under the Obama administration. The total number of online engagements between team members and online users has grown from roughly 2,000 in 2009 to 7,000 last year.

al-Qaeda’s use of the web to recruit jihadists has long been established. It’s been widely reported that the late American-born al-Qaeda leader Anwar al-Awlaki made use of the the web and social media to recruit new members and organize attacks. He is believed to have connected online with accused Ft. Hood shooter Nidal Malik Hasan and convicted “Underwear Bomber” Umar Farouk Abdulmutallab.

So it only makes sense that the State Department would take the fight with Islamic extremists online. But as the reaction to their latest video shows, the audience is often hostile.

“Is this supposed to be funny??!!” asks one YouTube commenter. “The worst comedia (sic) that I’ve seen in my life!”

By the standards of most comedians, this would be a pretty harsh reaction. But it’s something the outreach team is probably used to by this point. A 2012 review of the program published in The Middle East Journal revealed that online reaction to the outreach team is overwhelmingly negative. In a sampling of several hundred responses, only 4 percent of responders had a positive view of the team itself, while just a bit more —4.8 percent— expressed positive views about U.S. foreign policy.

But the study notes that it’s hard to tell just how effective the outreach team’s efforts are, since there is no way to measure the impact on “lurkers” – readers who view postings but do not comment.

Greetings, Muslim brothers everywhere and especially in Syria. In spite of all the unrest and my jihad duties in the lines of conflict and on the battlefield, [I am] far from Syria. (clears throat) Nevertheless, I wanted to speak to you today to clarify a very important matter that affects your lives and how we will control your destiny, uhhh, I mean your future, especially since today al-Qaeda has the opportunity to take the banner of oppression, tyranny, and killing from Bashar al-Assad, who has held onto it for decades, during which time he subjected you to humiliation and misery, and today, it’s our turn.

This matter is our indecision in choosing one of two sheiks of the killers, excuse me, I mean the jihadists, to be your new oppressor, uhhh, I mean your new leader. These two jihadists are Sheik Abu Bakr al-Baghdadi, commander of the Islamic state of Iraq, and Sheik Abu Muhammad al-Jolani, commander of Jabhat al-Nusra. I shall briefly go over with you the thuggery, excuse me, I mean the virtues of these two jihadists, so that I can decide on your behalf, I mean, you can help me decide, from which of them I will receive allegiance and which one I will install as your leader.

As for Abu Bakr al-Baghdadi, Iraq has seen what he has done to it, I mean, his heroic jihad . Not a city in Iraq has been spared. He has killed many Iraqis, blown up their schools, markets, and hospitals, and destroyed their mosques and churches, but unfortunately, because of his ferocity, which counts in his favor and not against him, he has made Iraqis hate al-Qaeda and the establishment of an Islamic state of Iraq. The Iraqi clans have begun to fight against us, and we no longer have a place to work there, so we have moved to Syria.

As for Abu Muhammad al-Jolani, he is new to the field of terrorism, I mean jihad, and even though he makes every effort, he has not accomplished as much as al-Baghdadi has. Many opportunities have presented themselves to him, but he has not used them well, and therefore, the name Jabhat al-Nusra is still new, and some naïve people do not know that it is only a branch of al-Qaeda. There is some hope that we will remain for a longer time and carry out more beheadings, I mean, jihad, and impose our plan on Syria and its people, but the decision is still difficult, and I am still undecided as to which one to choose.