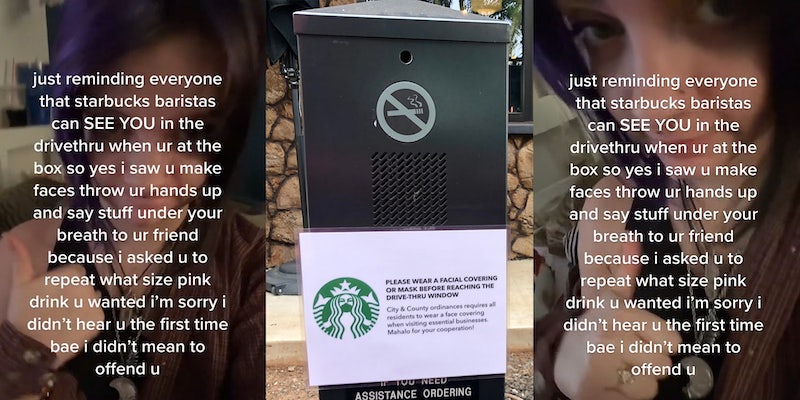 ‘Your drink will be made a little wrong’: Starbucks worker issues PSA to customers who order through drive-thru in viral TikTok

One of the toughest parts of working a retail job is dealing with angry and unpleasant customers. Many of them don’t mind being rude and condescending directly to your face, but imagine what happens when they think you cannot see them.

According to this viral TikTok, that’s exactly what Starbucks baristas have to deal with on a daily basis.

The video was posted by the user @thebugzonthestrawberries on Aug. 9, and it currently has more than 139,000 views. It is only six seconds long and, with its text overlay, serves more as a public service announcement to all Starbucks drive-thru customers: “just reminding everyone that Starbucks baristas can SEE YOU in the drivethru when ur at the box so yes I saw u make faces throw your hands up and say stuff under your breath to ur friend because I asked u to what size pink drink u wanted I’m sorry I didn’t hear u the first time bae I didn’t mean to offend u.”

The TikTok sparked a discussion in the comments, with many apparent Starbucks workers resonating with it.

“One time a customer flipped me off on the camera because I told her we were out of raspberry, I told her there was a camera,” one commenter said.

“No for real. or the people who visibly catch an attitude because I can’t hear them mumble from the passenger seat like goodness gracious,” another said.

“There’s a camera? omg.. i be digging for gold in my nose sometimes,” a third commenter jokingly overshared.

Another commenter, presumably also a Starbucks barista, left a warning for the rude customers: “Just know if you’re throwing up hand signs due to me not being able to hear you from the passenger seat, your drink will be made a little wrong.”

Viewers of this TikTok weren’t the first to remind customers about the cameras in the drive-thru. A worker in February similarly let customers know baristas can see when faces are made at them. That worker spoke with the Daily Dot at the time, telling us that customers either make faces or “judge” them in the drive-thru at least two-three times per shift.

The Daily Dot reached out to @thebugzonthestrawberries via TikTok comment.