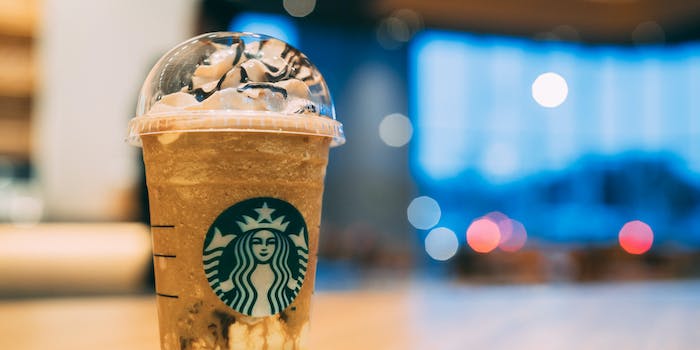 It has 13 separate customizations tagged to the order.

A Starbucks order customized just to your liking might just hit the spot, but the more specific the order gets, the more of a burden it puts on the barista tasked with making it. And this order just might take the cake.

On Saturday, @ProjectJosiee posted a photo of a Starbucks mobile order from a customer named Edward, tweeting, “On todays episode of why i wanna quit my job.” You only need to look at the label for the mobile order, which takes up a good portion of the coffee cup, to see why.

Edward ordered a venti (large) caramel ribbon crunch frappuccino, but on top of the frap, he also asked for 13 separate customizations that included extra toppings, drizzles and flavor, more ice and whipped cream, and a double blend. While it’s possible that the very specific combination might taste amazing, it’s also a clear case of someone taking the customization of a Starbucks to its limits. A couple of customizations is understandable. But 13?

“I knew it had to be an app order,” A Black Lady Sketch Show’s Ashley Nicole Black responded. “No one would order that out loud making eye contact.”

Some took to shaming Edward for the extravagance of his order, noting how much of a burden is put on overworked baristas who has to then make it.

There were jokes about a “vengeful deity” coming forth from that order.

Others imagined how Edward going to Dunkin’ Donuts would play out after realizing that his over-the-top order got his name trending on Twitter.

And some shared their own versions of a highly customized order that they’ve either had to order or make with @ProjectJosiee, some of which far eclipse the extravagance of Edward’s very specific order.

We might all be very particular about our coffee, so some old-fashioned shaming might not change it all that much. But it does provide a window into how hellish it is for baristas to make those orders—and a reminder that if you are putting in this kind of order, you should also tip your barista very well.