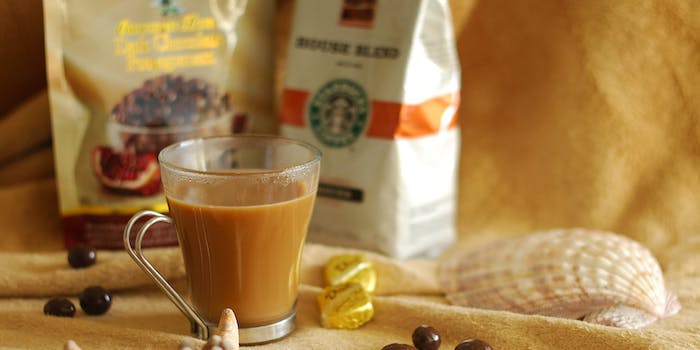 6 things that are weirder than the Starbucks beer-flavored latte

It doesn't matter what it tastes like, so long as it goes viral.

Unless you are somehow not on the Internet (in which case: How did you get here? Who sent you?), you have probably heard about Starbucks‘ proposed beer-flavored “Dark Barrel Latte.”

Despite being someone who loves both beer and coffee, this does not appeal to me at all. It does not appeal because—based on my experiences with Starbucks’ flavored coffee drinks—it will be:

1) Cloyingly sweet unless you request ¼ of the intended syrup

3) A waste of my time; I’m not a fan of things that taste like beer but are not, in actual fact, beer.

Obviously, I’d still try it if it were being offered at my nearest Starbucks, and you probably would, too. Don’t lie.

The Dark Barrel Latte has gotten a lot of very mixed reviews, but none of that matters. Taste has very little to do with it. It doesn’t matter if this latte is good because it has the words “beer” and “Starbucks” as descriptors—two words that the Internet loves—so it’s already successful. Even if it never gets past its testing audiences in Ohio and Florida, it has already worked to the benefit of the Starbucks corporation.

Each time Starbucks releases a new “Buzzfeed-able” beverage, the Internet responds by tweeting, upvoting, Facebooking, and Instagramming it. This essentially works as free advertising for Starbucks, keeping the behemoth coffee shop at the forefront of your mind. Even if you hate the idea of a Guinness-flavored Frappuccino, you may be dragged in by a friend who is eager to taste it—and, hey, you might as well get a coffee while you’re there.

At the very least, this latte has made you think of Starbucks more than you would have otherwise. It’s like Budweiser releasing the exact same beer in a large variety of containers so as to take up the largest amount of visual real estate, except in this case the real estate is your attention span.

Oreo is another corporation that constantly stays relevant by churning out new, fair-to-middlin’ flavors that we don’t really need or even want. (There are exceptions; it would be unfair to say the new Pumpkin Spice Creme Oreo was “unwanted.”)

In an increasingly extreme foodscape, clickbait-ready outrageousness is the easiest way for restaurants, fast food chains, and snack providers to stay relevant. But the tactic isn’t limited to large corporations. All it takes is one viral hit, and any mom and pop operation can become an internet sensation overnight.

By tweaking already existing, well-known items, these companies are able to create new buzz around an essentially old product. But Oreo and Starbucks aren’t the only players in the game of Internet Outrageousness; there are others, and some of them are even better at harnessing the web’s love of the extreme to gain devoted followings.

Here are six of my favorites:

1) Best Use of Twitter and Ridiculous Merch: KFC Japan

Japan is obsessed with KFC. Since the brilliant “Kurisumasu ni wa kentakkii!” (“Kentucky for Christmas!”) marketing campaign in 1974, Christmastime buckets of the the company’s fried chicken have become something of a national tradition.

To be fair, their KFC seems better than our KFC. Tokyo is home to a three story KFC that boasts a full whiskey bar, called “KFC Route 25.”

It makes sense then that Japan is the home to such excellent products as the chicken leg iPhone case and the chicken leg desk pillow and are brilliantly giving them away on Twitter.

Who wouldn’t want these items? Who doesn’t wish to shield themselves from today’s fresh hell by hiding inside a giant leg of fried chicken?

I first noticed The Vulgar Chef a few days ago because someone at Buzzfeed was clutching their pearls over his Red Velvet Corn Dog. I mean, I would eat it. A corn dog is already a hot dog wrapped in a sweet batter and then fried, why not take it a step further and make that a red velvet batter? Pancakes and sausages are good together, and there are red velvet pancakes, and hot dogs are a kind of sausage so, ipso facto, this corndog is genius.

But it doesn’t end there. The Vulgar Chef offers one a plethora of ways to #eatlikeshit, no matter what your budget, and each one is more outrageous than the last.

OddFellows had already set itself up as an Internet darling by offering flavors such as “Chorizo Caramel Swirl” and “Tobacco, Smoked Chili & Huckleberry,” but then they really leaned into it by offering the Cotton Candy Ice Cream Cone, a dessert hybrid consisting of s’mores ice cream served in a chocolate-dipped sugar cone which has been covered with smoked cotton-candy.

At this point, my mouth and my mind have been so saturated with ridiculous dessert hybrids, I’m not even sure I can offer a valid opinion on this one.

4) Most Upsetting Use of Twin Peaks by People Who Have Clearly Never Seen Twin Peaks: A Breastaurant called “Twin Peaks.”

Now this is would make an impressive Instagram photo. This assault on human decency is surprisingly tasty and not as many calories as I thought it would be. I mean, I’m not surprised that I enjoyed eating it, but I was surprised by how balanced it was. All the meats played off each other well, without one overpowering the others and, while it was salty, it certainly wasn’t as salty as it should have been.

Even the most cynical of Internet users cannot resist a cute kid, and this kid is the cutest. And, if you think about it, this is one of the best restaurant reviews ever written. Because at this point, there is nothing left to say about Thomas Keller’s Napa Valley restaurant, The French Laundry.

Or so we thought.

In a sentence I can only describe as succinct, thoughtful, relatable, and (probably) accurate, Lyla Hogan rocked the food-writing world by offering this review of TFL’s Summer Melon Soup: “It tastes like a Tinkerbell popsicle.”

Everybody go home. Food writing is over.

Those are just my recent favorites. As you can see, pretty much anyone can use Internet Outrageousness to their advantage, whether you are a blogger, a well known chain, a famous white tablecloth restaurant, or a small, local business.

Does using this tactic mean that one is all style and no substance? No. The truly successful will possess both, but it’s almost not enough to do a good thing simply anymore. You at least need a kitten or something.