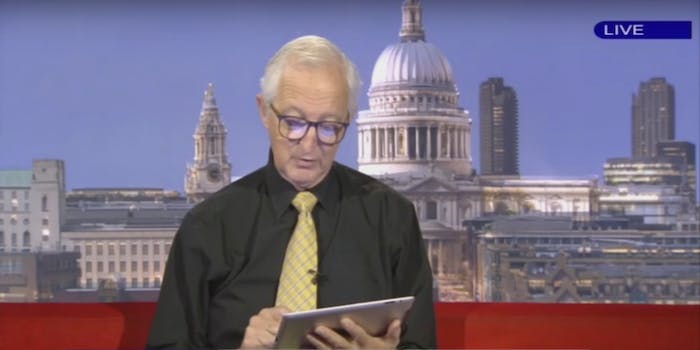 'There has been an awakening. Have you felt it?'

Star Wars: The Force Awakens may be everywhere at the moment, but a troll might have found one of the few places on the planet where a reference to the film could go over people’s heads.

Revelation TV, a U.K.-based Christian channel, will often take thoughts and prayers from its viewers live on the air. Recently, a viewer named “Harrison” sent in his thoughts to the host, who read them as if they were praise from any other viewer—and not a trolling message from a Star Wars fan.

“I feel the holy Force of the Lord be with so many this morning,” the letter read. “There’s been an awakening. Have you felt it?”

That last line is spoken by Andy Serkis’s Supreme Leader Snoke to Kylo Ren in the very first trailer for The Force Awakens. Many of the characters throughout the movie felt an awakening of sorts, but probably not like the one that Revelation TV imagines.

Granted, there is a Church of the Force in Star Wars canon, so maybe other characters offscreen are experiencing that kind of awakening.