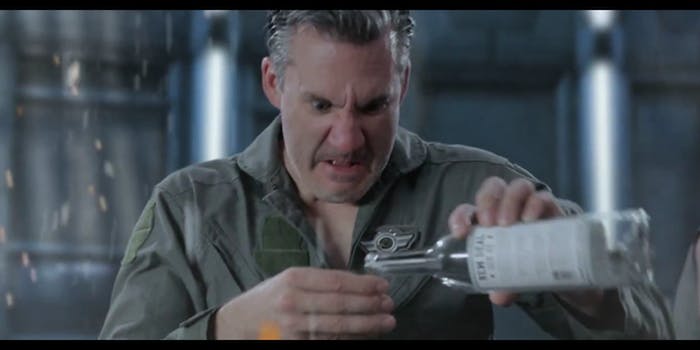 A tale of betrayal, duty, and SHOTS.

In space, can anyone hear you dry heave? That’s the question a group of friends and filmmakers asked when they created this besotted mashup of Star Wars and Battlestar Galactica, called Star Drunk: Space Alien V. From the YouTube page of director Chris R. Wilson:

“Star Drunk is the sequel to the viral short film ‘Cleverbot: Do You Love Me.’ Star Drunk is an experiment in writing a short film while drunk; several writers from Portland got together one night to write the script. We promised each other that whatever we wrote that night, we’d produce as a short film.”

That five-minute clip begins with shots of vodka and some intense slurring, and it ends with an excellent “Go home, you’re drunk” joke. In between, there are dramatic speeches, interstellar battles, and betrayals. And more slurring. Another question: So whyzit s’bright on the ship?