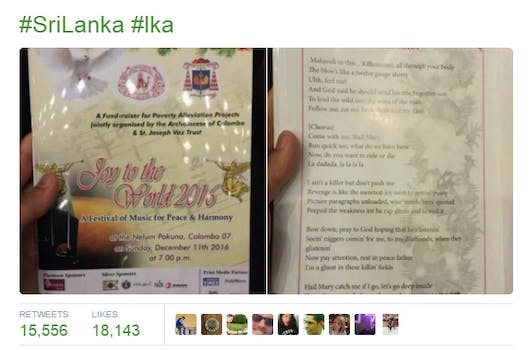 I believe it was the prophet Pac who said, 'I ain't a killer but don't push me.'

Tupac‘s immortal “Hail Mary” may feature the lyrics “empty out my clip, never stop to aim,” but the “la da da” chant at the end of the chorus does seem festive and appropriate for the holidays.

But that’s not why a church in Colombo, Sri Lanka, printed the lyrics to the standout Don Killuminati: The 7 Day Theory track and passed it out during a Christmas service. Officials simply printed the wrong “Hail Mary.”

A Christmas Carol service in Sri Lanka has accidentally printed the lyrics of Tupac’s Hail Mary, instead of the prayer.#SriLanka #lka pic.twitter.com/djhJPAWhcj

“A lot of people were in shock as whether it was a joke or someone would actually rap the song,” Twitter user Ravindu Thimantha, who pointed out the gaffe on social media, told CNN. “A few of the older ladies in front of us could not stop looking at the printed booklet.”

I believe it was the prophet Pac who said, “I ain’t a killer but don’t push me.”