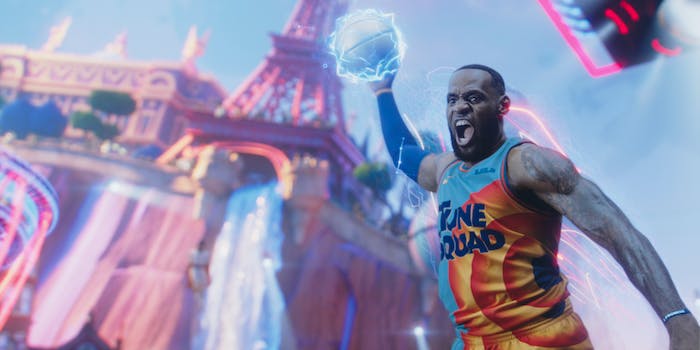 About 15 minutes into Space Jam: A New Legacy, LeBron James is presented with an opportunity to “revolutionize the entertainment industry” by a couple of Warner Bros. executives played by Sarah Silverman and Steven Yeun, who were given the idea by their company’s internal algorithm. The gist is that a copy of James’ likeness would be scanned into the system, which will then insert him into other Warner Bros. properties to do things like face off against Batman, sit upon the Iron Throne, and play Quidditch at Hogwarts. After making a joke about how mixing athletes and acting never goes well, James tells the execs that “it’s among the worst ideas I’ve ever heard. Top five, easily.” It’s the closest that Space Jam: A New Legacy gets to self-awareness before spending much of the next 100 minutes essentially doing what it was just criticizing.

Release Date: July 16, 2021
Director: Malcolm D. Lee
Streaming: HBO Max
After he’s transported into the ‘Warner Bros. Serververse’ by a disgruntled algorithm, LeBron James teams up with the Looney Tunes to play a high-stakes—and high-tech—game of basketball to get back home. With several familiar beats as the original ‘Space Jam’ with heapings of WarnerMedia corporate synergy, it often operates more as a two-hour infomercial for WarnerMedia and HBO Max’s library than a film.
Advertisement Hide

Space Jam: A New Legacy is a sequel 25 years in the making. Following many of the same beats as the 1996 film, it pairs James, the Looney Tunes, and a sea of Warner Bros. intellectual property for a no-holes-barred basketball game that will determine not only James’ future but also that of the Looney Tunes. And while it has its moments, Space Jam: A New Legacy is less a movie and more of a soulless showcase of WarnerMedia’s extensive archives that doubles as a 115-minute HBO Max infomercial.

That’s not to say that the original Space Jam, which came out of a meeting between a Nike executive and producer Ivan Reitman after the creation of several Air Jordan ads featuring Jordan with the Looney Tunes in the early ’90s, is innocent of being a feature-length commercial. Amid the film’s hidden pro-union message and the long-held nostalgia for the original film by millennials who were the target age when the movie was released, it absolutely was that. The Looney Tunes have thrived on inserting themselves into pop culture for decades, and it’s not even the first time that the plot of a Warner Bros. movie centered around combining several Warner Bros. properties together for aesthetic reasons.

But The Lego Batman Movie had a strong message of a found family at its heart, and while Ready Player One was morally bankrupt, at least it still had some great visuals. Space Jam: A New Legacy mostly uses the integration of Warner Bros. IP as little more than brief flashes or visual gags sandwiched in-between the rest of the film, which tries to tackle a father-son rift, a message about having fun and following your own dreams, and some surface-level commentary about how much of our information tech companies can access.

James, playing a version of himself, struggles to connect with his son Dom (Cedric Joe), who is more interested in working on video games and wants to go to a video game design camp instead of the basketball camp James clearly wants Dom to attend. After butting heads, they’re both sucked into the Warner Bros. Serververse, a digital landscape where all of WarnerMedia’s IP exists across several planets that more or less looks like it copy-and-pasted Ready Player One’s OASIS. James and Dom encounter the server’s disgruntled algorithm, Al G. Rhythm (an incredibly zany Don Cheadle), who takes Dom under his wing and challenges James to a basketball game.

The stakes are simple: If James wins, he and Dom can go home, but if James loses, he’s stuck in the Serververse forever. Al G. Rhythm promptly punts James over to Tune World, which is abandoned except for Bugs Bunny (Jeff Bergman). They agree to work together to assemble a team, but their motives couldn’t be more different. James wants to assemble a team of elites with heroes like Superman and the Iron Giant on his list of must-haves, but Bugs just wants to get his friends back together, all of whom took Al G. Rhythm’s offer to explore other parts of the Serververse.

Because this is a Looney Tunes movie, it doesn’t take much to venture whose plan wins out. But because it’s also a Warner Bros. movie, this means a montage pairing as many Looney Tunes with as many existing WarnerMedia properties as possible. Some of the gags, such as the discovery of where the Tasmanian Devil ends up or a sequence putting Lola Bunny (Zendaya) in Themyscira, are on the cleverer side, but sometimes the pairing is as simple as inserting the Road Runner and Wile E. Coyote into Mad Max: Fury Road because their cartoons are set in the desert or placing Foghorn Leghorn in Daenerys Targaryen’s wig solely for the visuals.

As with the original Space Jam, the biggest centerpiece of the film is the climactic basketball game, which is really Dom’s spin on the game that rewards extra points for style and other flourishes. Thanks to the 3D animation upgrade given by Al G. Rhythm, it also looks messy, working more like a downgrade in execution. Meanwhile, a blend of regular people and just about every WarnerMedia character you can think of watches the big game against the Goon Squad. This time around, the rival team is made up of other basketball players like Klay Thompson, Anthony Davis, and Nneka Ogwumike paired with creatures or other abilities.

Space Jam: A New Legacy works best when it embraces the silliness that the Looney Tunes has to offer. Cheadle dials it up, providing some of the film’s biggest laughs (both intentional and not), and there are plenty of digs at the original Space Jam as well as James’ career hopping around several different NBA teams. James, who had a well-received supporting role in Trainwreck, is a far better actor than Jordan, so he has a leg up there. But Sonequa Martin-Green, who plays James’ wife Kamiyah, is given little more to do than to yell and react to whatever is happening on the court. After a while, it becomes a slog.

Who is Space Jam: A New Legacy for? You could argue that it’s for young kids like the original and the grumbles of the adults watching for nostalgic reasons don’t matter, but some of the references aren’t really the sort of things many parents would let young kids watch. If it’s really for nostalgic millennials, the references are often groan-inducing and the meta-commentary will only carry the film so far. Or maybe it’s a film specifically engineered for the YouTube movie Easter egg industrial complex, but Easter eggs don’t guarantee a good movie (and it doesn’t guarantee that people who watch those videos will tune into the Space Jam sequel).

Whether it’s a perk or an unintentional view into the sad state of cinema, Space Jam: A New Legacy is a reminder that whatever your feelings, it’s, if nothing else, a launchpad. It’s also a showcase of streaming limitations: Thanks to the complications of streaming rights and who owns them, you can’t even stream everything referenced in the film.

And almost every element in Space Jam: A New Legacy is outshined by its own source material. Looney Tunes? There are better cartoons available online. Those films? Well, you’d be better off just watching them instead.

Space Jam: A New Legacy is now out in theaters and available to stream on HBO Max until Aug. 15.