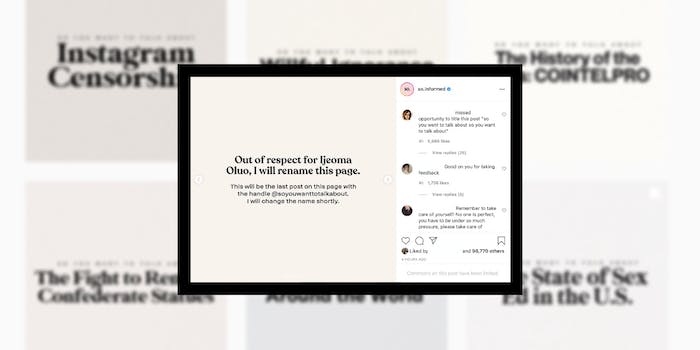 The owner of the @soyouwanttotalkabout account posted an apology and changed the page's name.

The woman behind the popular Instagram page formerly known as @soyouwanttotalkabout uploaded an apology yesterday after including a racial slur in a post about immigration. The page is one of many accounts known for its infographic carousels featuring bite-sized aesthetic presentations on various social issues. As the page faced criticism for not censoring the slur, its followers argued there were larger issues at hand with the account, including its name.

In the apology that was posted the page’s admin Jessica Natale wrote that the immigration post was worked on with a collaborator. The post mentioned a government mass deportation project that included a racial slur in it that she did not censor.

“I did not censor the slur when I was adapting the text to the graphic slides because I didn’t want to whitewash history and I did not want to censor my collaborator,” she wrote.

Natale said that a group chat discussion was made to “facilitate the conversation about the harm.” She then included screenshots of messages from the group chat.

“I am very apologetic to anyone who was harmed by the language used in the post,” she continued to write on the next slide, “I do not want the content on this page, whether it was written by myself or a collaborator, to ever cause harm to anyone.”

In the next slide, Natale said she has also been privy to the conversations about who was running the account and the confusion stemming from its similarity to the title of a book called So You Want to Talk About Race by Ijeoma Oluo. Many believed Oluo was behind the Instagram account until she cleared it up.

Oluo posted on her Instagram story about her experience with the account. She explained that in the summer of 2020, when the world was reckoning with racial injustices against Black people in America, her book sales began to skyrocket. People mentioned the @soyouwanttotalkabout Instagram account to her, and she got in contact with the account owner, Natale.

According to Oluo at the time, there was no indicator on the profile to show that the account is run by a white woman, which Natale has since changed. She said the account later put up a disclaimer to clarify that they are not affiliated with Oluo, but it wasn’t enough to stop the flood of messages Oluo received because people still thought the account was linked to her.

Natale announced today on the @soyouwanttotalkabout page that she will be changing the name of the account and that she apologizes for any harm she may have caused Oluo. Her page has since been renamed to @so.informed.

Natale and Oluo did not immediately respond to the Daily Dot’s request for comment.