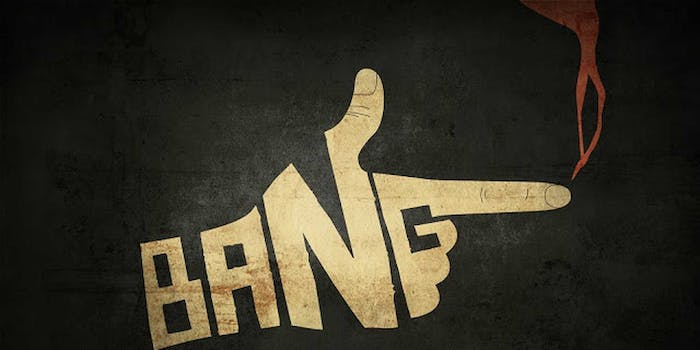 Click this button to gamble with your social media life

Play Social Roulette and take a one in six chance with your Facebook life.

There’s a new app that fulfills some of your darkest (or perhaps most liberating) social media fantasies. Social Roulette gambles with your Facebook life. Every time you play, there’s a one in six chance your Facebook page gets nuked.

While it’s very difficulty to “permanently delete” a Facebook account, we can completely remove all your posts, friends, apps, likes, photos, and games before completely deactivating it.

Deactivating your account isn’t really deleting it, so the promised social suicide is a little incomplete. To reincarnate on Facebook after deactivation, you need only login again with your original email and password. Facebook has a very wide safety net for people who want to jump ship, and while it does allow you personally to permanently delete your account, it won’t allow any app to do it for you.

Chatter on Twitter and Hacker News indicates the thing really works for a few unlucky/lucky individuals—or, at least, it did work. Shortly after launching, Social Roulette hit a snag with Facebook’s API, which stopped it from working properly.

On Twitter, the site referred to the bug as a “political problem,” and others wondered if perhaps Facebook had grown wise to the app. As easy as it may be to reactivate your account, the last thing Facebook wants is a social suicide app spreading virally across its network. Indeed, while there’s a one in 6 chance your account will disappear, there’s a five in six chance you survive, and Social Roulette will post an ad to your Facebook page that looks like this:

The site’s creators say they’re “working hard” to fix the API problem. In the meantime, try to play the game yourself. Open up the “Delete account” page on Facebook, close your eyes, and swing your cursor wildly around the screen as you click the mouse. Maybe you’ll get lucky.