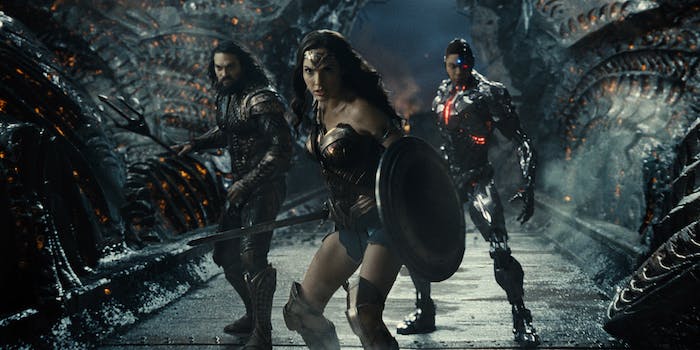 It starts playing several times in the film.

Zack Snyder’s Justice League is full of Snyder’s trademark slow-mo, a film technique he uses for both storytelling and flourishes. For the former, it’s a way to fuel and build aspects of Snyder’s DC Universe, such as its depiction of Barry Allen’s super-speed; for him, everything (including a hot dog) is slowed down exponentially. But more often than not, it’s a way to make something like a fight scene look more dramatic.

In the Snyder Cut, that all comes to a head—and is even fueling a new TikTok trend—with Wonder Woman’s depiction in the film, the debut of a new theme, and Snyder’s slow-mo all collide.

A version of Wonder Woman’s guitar riff that first showed up in Batman v Superman is still included in the score for the Snyder Cut, which is composed by Tom Holkenborg (who’s also known by the stage name Junkie XL). But Holkenborg also included a new theme for Wonder Woman called “Wonder Woman Defending & Rough Beast.” The piece is nearly seven-and-a-half minutes long, but for those who’ve seen the Snyder Cut, the standout arrives around the 2:00 minute mark as a woman’s voice emerges in a cry.

Even if you didn’t know the name of the song, you’d probably associate that cry with Wonder Woman because it tended to pop up whenever she was about to do something dramatic. Here it is in action at the end of the Justice League’s final fight with Steppenwolf. First, Aquaman stabs Steppenwolf in the back with his trident. Then, Superman punches him hard enough to send him hurtling through the portal back to Apokolips where Darkseid resided. And as he reaches her, Wonder Woman jumps and Steppenwolf’s head off with her sword before his head and body land back in Apokolips—all of which is done in slow-mo.

It’s very much in line with what Snyder does, but it’s also kind of ridiculous.

Since posting the video a few days ago, hundreds of new TikToks using @tanners.tiktok’s sound clip have emerged as people do ordinary things as the music plays, a nod to just how little it took Wonder Woman to do for the music to start playing.

Some of them, such as @flooskoos’ iteration while washing a wine glass, includes the slow-mo homage.

As does Mia Khalifa’s rendition, which shows her brushing her teeth very slowly.

Zack Gonzalez’s use of the clip turns the discovery of a spider into an epic (albeit one-sided) battle.

But other versions are largely in reference to the fact that all Wonder Woman has to do is enter the scene for the music to start playing.

It also emerged on Twitter, where part of the fun became trying to recapture the music instead.

Do iterations of that motif really appear that much in the Snyder Cut? If you don’t plan on rewatching the film to find out, someone readily created a supercut of over a dozen instances in which some variation of it shows up.

But if nothing else, you’ll walk away from the Snyder Cut having Wonder Woman’s new theme in your head.