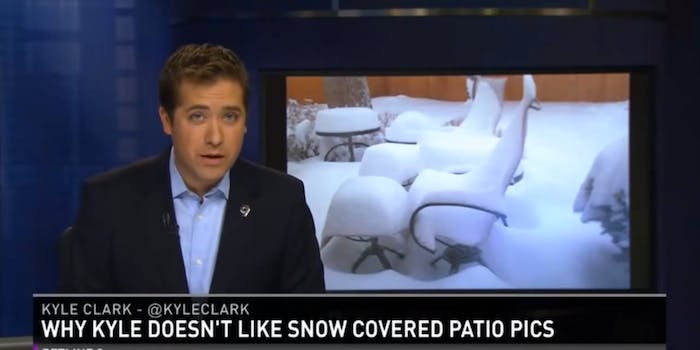 "What a sad way to celebrate the season," he said.

One news anchor has had it with your snow-covered patio furniture photos.

Colorado is no stranger to the white stuff, and no matter how small or big a snowfall, TV viewers will send in plenty of photos for the local news stations to use.

It’s a staple for pretty much any area in the country that receives snow, and with a recent storm to the Denver area, KUSA anchor Kyle Clark reached his breaking point when it came to the many backyard photos his viewers sent in.

He took his soapbox to the 4 o’clock news on Thursday for his “first (and last) on-air editorial” about the photographic epidemic. He called viewers out for the overused shot, calling it boring and lazy.

“Coloradans are too optimistic to live in a prison of patio sets,” Clark said. “What a sad way to celebrate the season.”

Some viewers didn’t take kindly to Clark’s stand on the photos.

Thank you for your thoughtful take on our story. RT @AdamObendorf: Try hiring a photographer, asshole.

From the Inbox: A viewer is baffled I am still employed: http://t.co/wL0kdEjYqM #9NEWS

Of course, this could result in KUSA getting even more lawn photos in what will probably be an uphill battle—probably on snow.