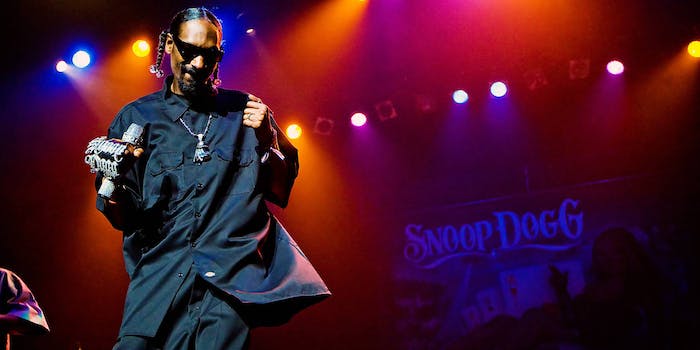 Finally, that misdemeanor has meaning.

Snoop Dogg played an unforgettable show on Thursday night at the Klipsch Music Center in Noblesville, Indiana. Along with co-headliner Wiz Khalifa, the acclaimed rapper bypassed the larger city of Indianapolis just half an hour away in favor of giving suburb dwellers what they wanted. Oh, and Snoop signed some guy’s citation for possession during a meet and greet.

Redditor just-casual got caught with that good good on his first date with his girlfriend. Being a sentimental stoner, he kept the write-up with him at all times as a memento. The two celebrated their love in 420 fashion on Thursday with an epic night out, catching the High Road tour’s stop in Noblesville, meeting Snoop Dogg, and even making it onstage for “Gin and Juice” as well as Dogg covering Biggie’s “Hypnotize.”

Just-casual took video of the signing, and it’s pretty clear that Snoop Dogg supports his right to get high. Presented with the citation, the rapper says “that’s crazy,” signs the write-up, and gives just-casual a fist bump. Stoners gotta stick together.

And, for the full crazy concert experience, here’s some footage of just-casual, his girlfriend, and a shitload of fans getting their eardrums blown out while Snoop Dogg works his way through “All I Do is Win.”