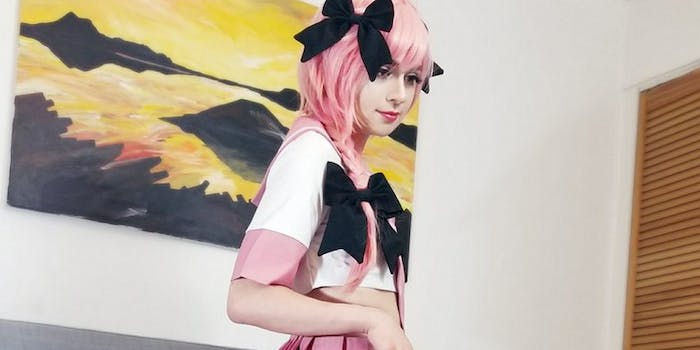 Here's what Donkey Kong, Chelsea Manning, and Rep. Alexandria Ocasio-Cortez have to do with it.

In February, Twitter user @GoodWitchLeigh told her followers that she wanted to attend a game in the League of Legends Championship Series and ask Sneaky to say “trans rights.” After deciding to do so on Friday, she caught Sneaky and asked him to say the phrase, to which he obliged.

holy shit you actually did it

If you’re not familiar with the meme, merely saying the words “trans rights” signifies solidarity and support with trans people and their struggle for basic rights. The phrase went viral after YouTuber Harry “Hbomberguy” Brewis hosted a fundraiser Twitch stream for the U.K. trans youth charity Mermaids. During the stream, Hbomberguy would ask guests to say “trans rights” while playing Donkey Kong 64. In one case, Donkey Kong’s voice actor said “trans rights, OK!” In another, Rep. Alexandria Ocasio-Cortez (D-N.Y.) showed up and said “trans rights!” after being invited by none other than Chelsea Manning.

Simply saying the words “trans rights” or drawing a character wearing a shirt with the phrase remains incredibly popular with the trans community. It’s a way to express solidarity with trans people, but it’s also a tongue-in-cheek joke, like a character is unsolicitedly expressing proud, out, and unyielding support for trans people.

Imagine your mom calling you on the phone and hearing her randomly shout “trans rights!” at the end of your chat. It’s cute, funny, a little unexpected, but most of all, empowering to hear.

Even the Daily Dot joined in on the fun with transgender character Erica Anderson from Catherine.

Sneaky saying “trans rights” is just part of a much larger phenomenon where the trans community creates memes to heal together and support one another. So go on, don’t be afraid to say it. To quote Sneaky and Rep. Ocasio-Cortez, “trans rights.”

Update March 4, 4:30pm CT: In an interview with the Daily Dot, @GoodWitchLeigh called Sneaky “one of my favorite players.” However, she noticed that Sneaky had never publicly expressed any form of support for trans people. Attending the LCS quickly became the perfect opportunity.

“So when the ‘trans rights!’ meme started it was a no brainer to try and get Sneaky to say it,” @GoodWitchLeigh told the Daily Dot. “And when me and a friend decided to attend LCS (which is something we’ve been wanting to do for a long time) I knew that I had to get him to say it.”

After Cloud9 finished their game at the series, @GoodWitchLeigh attended a fan meet with the team. After the initial crowd dispersed, she made her move, asking Sneaky to say “trans rights.”

“You can hear the tail end of our conversation at the beginning of the video but basically I just said like ‘Hey Sneaky I just wanted you to know that you have so, so many fans of you and your cosplays in the transgender community’ and that’s when the video starts,” she told the Daily Dot. “From watching his streams I knew he would say it if I framed it as ‘your fans would love it’ 😂😂.”

For the record, Sneaky seems to be a star attraction for fan meets. When Cloud9 players host meetups with viewers, it’s hard to tell who wants to meet the team and who just wants to meet Sneaky. It’s understandable why: he’s not just an esports player, he’s a crossplaying legend.

“I just want to say that I’ve been a huge fan of [Sneaky’s] for so long so getting him to say trans rights means so much to me on a personal level,” she told the Daily Dot, “and next time I go to LCS I’m getting more players to say it. And that’s a promise.”