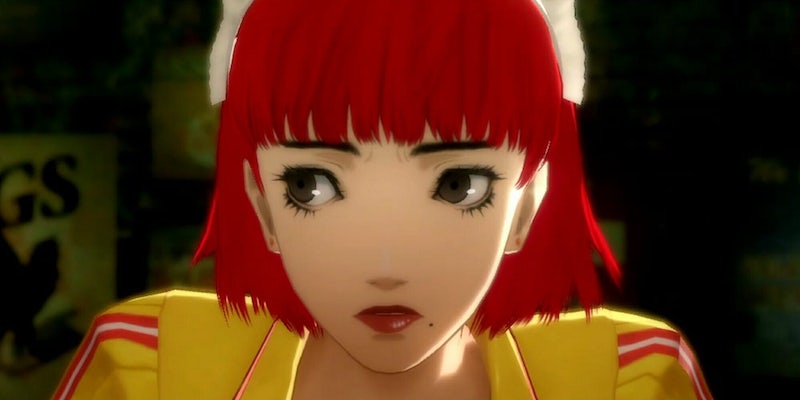 Catherine: Full Body reported to be ‘adjusting’ its transphobia after backlash—but is it enough?

February hasn’t been a good month for transgender gamers. Just utter the word “Catherine” on Twitter, and you’ll see why.

On Feb. 14, Atlus released Catherine: Full Body in Japan. The game serves as a remake for the company’s 2011 puzzle platformer, Catherine. Similar to the Persona series, which details the trials and traumas that teenagers experience while otherworldly events plague their high school years, Catherine stars a 32-year-old everyman protagonist named Vincent Brooks dating his high school friend Katherine. During the game, Vincent is haunted by strange dreams after meeting a 22-year-old woman named Catherine (not to be confused with the woman who spells her name with a “K”), who he sleeps with after hanging out at the local bar, the Stray Sheep.

At the Stray Sheep, Vincent regularly speaks to Erica Anderson, a transgender waitress he went to high school with. Vincent and his friends like Erica, and yet they berate her with transphobic remarks throughout the game, culminating in her being outed as trans in one of the game’s endings. Because of Erica’s depiction in the original game’s manual, which lists her by her deadname “Eric,” Catherine has long left trans players conflicted over Erica. Some saw her as flawed but realistic. Others felt Atlus’ depiction of her was harmful to trans women.

But the original was eight years ago, and the world is in a different place. Or so one would think. As it turns out, Catherine: Full Body’s Japanese release isn’t making amends with the game’s transphobic past. It’s doubling down on it.

First, a 2017 trailer for the game appeared to draw on a transphobic trope about straight cis men being surprised by non-op and pre-op trans women’s genitals. Trans gamers worried this was a sign of things to come. Then earlier this month, news broke out from ResetEra about additional transphobia in the game. One post claimed the game’s new character, Rin, is a “crossdresser” that has a penis, leading Vincent to panic and slap Rin’s hand away.

Things got worse. In the new version’s ending, Catherine goes back in time to make sure she can date Vincent in high school. When the game switches back to the present day, Erica is shown as a boy, implying she hasn’t transitioned. It’s unclear if Erica will transition or not, nor is it clear if Erica still has gender dysphoria in this timeline. Either way, the game heavily implies Erica remaining pre-transition is best for her future.

“At the wedding, almost everyone else’s lives are improved,” original poster HylianSeven wrote. “Paul, the guy that died at the beginning of the game in both this version and the original, is alive and dating Katherine. They are happy. Vincent and Catherine are happy together.”

The remake’s ending proved incredibly controversial with transgender gamers. At best, it’s implying Erica avoided transitioning for years of her life, which would be an incredibly painful and uncomfortable experience for a transgender woman in her 30s. In the worst case scenario, it’s outright implying that Erica’s best life involves her never transitioning, as if a trans woman’s dysphoria can simply go away without transitioning.

It didn’t take long for the ResetEra post to go viral on Twitter, sparking an immense backlash after the game’s Japanese release.

One thing to remember is the catherine transphobia is not a "Japan" thing. There are tons of LGBTQ Japanese people. There are cis people from Japan who don't believe these views. The Missing exists and shows a Japanese cis man can learn from trans people and fix his shit.

anyway erica anderson is a beautiful trans woman who deserves the world and atlus can suck my butthole, thanks for coming to my ted talk! pic.twitter.com/QjWmLlCBun

“It is so much worse than I feared. I have, in the last hour, seen my [friends’] pained, shocked reactions,” Dacidbro wrote in a TwitLonger from Feb. 16. “I am so livid, I am so crushed, I wish I was fucking surprised.”

As backlash continued to brew, Erica’s voice actress Erin Fitzgerald confirmed in her public Discord that she would be reprising her role in Catherine: Full Body. But she also revealed that Atlus USA’s localization team is taking the game’s translation “very seriously” in terms of its “bigotry” in the Japanese release.

“I will not discuss the new content until the game is released and people have experienced it,” Fitzgerald wrote to her Discord, according to DualShockers. “Know the localization team took the translation very seriously in terms of trying to adjust bigotry represented in the Japanese version… we won’t know if it was successful til the audience plays it and reports back.” (The Daily Dot reached out to Fitzgerald and Atlus USA for comment but has not heard back as of this posting.)

As for what this means, it’s unclear. But there’s a chance that Erica’s depiction may change in a positive direction. Some trans gamers wonder if Catherine: Full Body will do away with some of the worst transphobia in the Japanese version and provide a much more affirming experience for Western gamers.

“Some lines in the original are pretty terrible,” one transgender Twitter user wrote. “I feel at the very least that they will definitely fix the deadnaming since the localization team apologized for it last time.”

Interesting news on Catherine. According to Erica’s VA, Atlus’ localization team “took the translation very seriously in terms of trying to adjust the bigotry represented in the Japanese version”

Criticizing Catherine isn’t just internet drama for its own sake. It’s good to get mad. When players speak out loudly against transphobia and other forms of bigotry in media, developers may listen and make changes, like they appear to be doing with Catherine. At the very least, pointing to problems and demanding developers do better shows the world that they need to take queer and trans media depictions seriously, lest queer consumers vote with their wallets and walk out on a developer.

But the Catherine: Full Body backlash isn’t just about making changes for an American audience. Catherine is an opportunity to step back and give a platform to the critics who are familiar with these specific cultural impositions, the critics who are most likely to enact real, lasting change: queer and trans people in Japan.

It’s impossible to talk about Erica Anderson’s characterization without mentioning the culture that she comes from. While the game technically takes place in North America, it reflects so much about Japanese gender roles that you’d be forgiven if you thought the game took place in Japan.

In February 2018, Japanese games journalist Kazuma Hashimoto penned an essay for Anime Feminist breaking down Erica’s characterization. Hashimoto, who is a transgender man, points out that Erica’s treatment by Catherine’s narrative is complicated: She values trustworthiness, yet her transness prevents her from having children and makes it more difficult for her to marry a man, which are two strikes against a woman’s trustworthiness in Japan. Combine this with the transphobia hurled against Erica by the game’s cis men, who believe she must disclose her gender identity before sleeping with one of her patrons, Toby, and Erica represents a lot about the messy intersection trans women are forced into within Japanese society.

“Though the character is popular among Japanese audiences despite her identity as a trans woman, the inherent transphobia written into Erica’s character is reflective of Japanese society, as conformity is part of the social constructs within the country itself,” Hashimoto writes. “Erica is the product of misinformation about lifestyles that were not visible, and still remain somewhat invisible, in a conservative society.”

Granted, Erica is complicated, messy, and problematic. Yet while the game looks down at her in times, she’s still depicted as a sympathetic female character. In an interview with the Daily Dot, Hashimoto stressed that the most important thing about Erica is her identity as a woman, how she’s influenced by gender norms, and the expectation trans women feel to pass as cis in Japanese society.

“Is she a positive character? I think that depends from person to person,” Hashimoto told the Daily Dot. “At the time I thought it was positive, but the game treats her as dishonest and paints her in a horrible light so it’s hard to argue she is good with that intent in mind.”

While Western gamers have called the pushback against Full Body “manufactured outrage,” this is untrue. Queer Japanese gamers have been speaking out about the game’s handle on Erica online for quite some time, Hashimoto told the Daily Dot. In one case, a blog post compared Japanese and Western reactions to the remake, concurring that Full Body’s content is transphobic even if “the ‘intent’ was good on behalf of the creator.”

“There are more unhappy responses this time around than there were when the original released,” Hashimoto said. “This is probably due to the accessibility granted to us by the internet, so it’s hard to say if people are more upset now or if they always have been and are only now having the chance to speak about it and be heard.”

Instead of buying Catherine: Full Body consider downloading One Night, Hot Springs (which is free and about a Japanese transwoman) and donating the money you would have spent to any LGBT+ charity.

Also please consider checking out Marriage For All which explains the current state of same-sex marriage in Japan and consider donating to the change petition the 13 couples have created to cover their costs as they sue the JP government for equal rights. https://t.co/pwTg7wUdyI

In his piece, Hashimoto points to mendokusai, or “it’s troublesome,” a Japanese mindset that argues Japanese queer critics should not draw attention to themselves and demand better from problematic media. The expectation is that microaggressions should be accepted without criticism, even if they are particularly harmful or spread misinformation. Meanwhile, according to this mindset, backlash from the West simply won’t make a difference to creators like Atlus: There’s a prominent attitude in Japan that media being created by Japanese developers simply isn’t for Western gamers.

So while it’s good that Western critics are demanding Atlus do better, Americans and Europeans must still use their anger and outrage responsibly by raising the voices of Japan’s queer gaming community. It’s these critics that can enact real change in Japan, as a Japanese developer may be willing to accept flaws with their work or make changes to their stories if Japanese gamers refuse to purchase a game with transphobic content.

“With the localization team softening the bigotry in the Western version it’s important to remember that this is still completely present in the original,” Hashimoto said to the Daily Dot. “This does not make Full Body any less transphobic in intent, it just changes the context. It’s important to acknowledge and accept this, so I hope people will consider that when playing the English localization.”