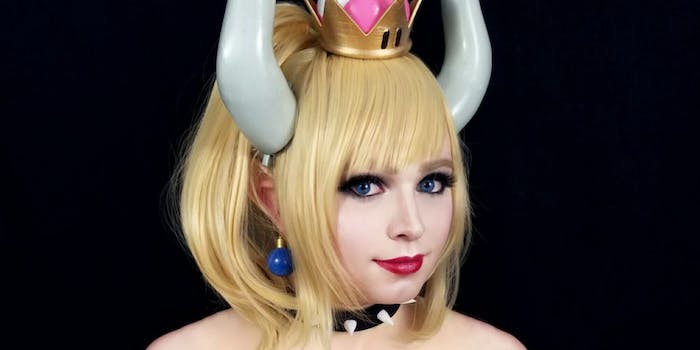 The Cloud9 player breaks the internet.

Esports star Zach “Sneaky” Scuderi has a side gig as a cosplayer, and his latest shoot may be his best yet.

Sneaky plays for Cloud9 as an AD Carry in Riot’s MOBA League of Legends. Over the past year, he’s also built an online following thanks to his crossplay photoshoots, or cosplay involving crossdressing. This time around, Sneaky embraced Super Mario Bros’ Peach and the fandom’s feminized Bowser meme, Bowsette.

Both shoots feature the esports star with breast forms added to his outfit—or “a little extra,” as he teases. Per usual, photos, makeup, and props are all supplied by his girlfriend, fellow cosplayer Esther Lynn.

Twitter quickly caught Sneaky’s latest look and fell in love. After all, the esports world could use a few more boys in dresses.

These skins leave me Peachless

You are improving it every single time.

I’m jealous as fuck to be completely honest here

YOU'RE BETTER AT BEING A GIRL THAN ME

It doesn’t hurt that Sneaky and his girlfriend went all-out this time around, complete with prosthetics that look incredibly realistic. Twitter wants some answers.

Sneaky is evolved.. Even got the breasts done

BUT WHERE’D YA GET THEM TITTIES?! 🤪

In other words, Sneaky is the ultimate gamer, and he’s king (and queen) of the esports world.

As for why Sneaky’s cosplay is so popular, fans want to see his cosplay because it’s crossplay, not in spite of it. Dot Esports reporter Nicole Carpenter stresses that Sneaky is challenging esports by introducing non-normative ways of thinking about gender and cosplay.

“Esports is very heteronormative and his cosplay choices are moving the boundaries—and folks want that boundary of what’s acceptable to expand,” Carpenter told the Daily Dot. (This reporter used to work for Dot Esports, an esports publisher that was previously a part of the Daily Dot.)

This isn’t the first time Sneaky went viral with his crossplay looks. In November, Sneaky cosplayed as Dynasty Ahri from League of Legends. Then there’s his iconic Halloween cosplay, where he donned an outfit for Astolfo from Fate/Apocrypha, complete with thigh highs and a pink schoolgirl outfit.

Zach and I got to do a collab with @Team_SpiralCats ! I had an amazing time💕 Thank you for being so kind to us😻 pic.twitter.com/87I8x5e7af

Suffice to say, fans can expect more Sneaky cosplay in the near future too, as he teased in late October that “many streams and cosplays are coming soon” during his off-season.