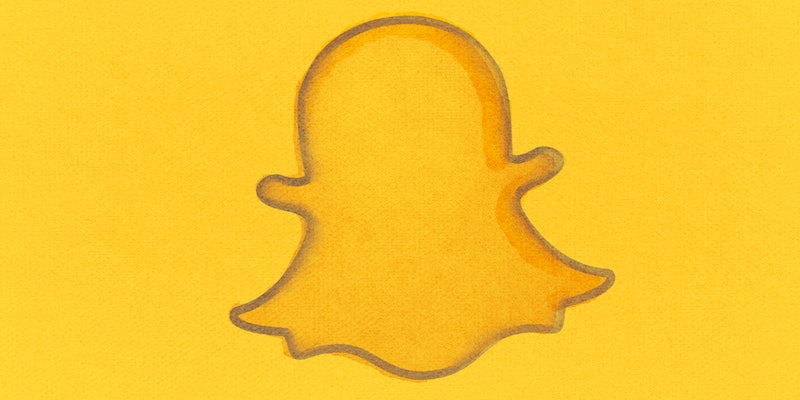 If you find yourself increasingly bored with Facebook, you’re not alone.

If you find yourself increasingly bored with Facebook, you’re not alone. The largest social media site on the Internet has gone from being a cool new way to socialize to becoming the online equivalent of an office picnic. The average age of a Facebook user has slowly crept into the 40s—as both the first generation of users grow older and teens flee the site in record numbers.

One of the most popular destinations for teenage digital natives has been Snapchat, the “ephemeral messaging” company with 100 million users, and this week, researchers may have found out a key reason why. A paper published in the University of Michigan journal Information, Communication, & Society measured the relative happiness of individuals using different forms of electronic communication. While Facebook, email, and instant messaging ranked near the bottom, Snapchat bested all other media when it came to putting users in a good mood. In fact, the only means of communication that ranked above Snapchat was in-person, face-to-face conversation.

If the goal of digital communication is to closely simulate real-world interaction—without the geographical limitations therein—Snapchat is way ahead of the game. The messaging app, which allows users to send self-destructing messages, images, and videos, has much more in common with actual human interaction than any of its competitors, and it’s becoming abundantly clear that websites like Facebook have severe limitations when it comes to what users value most.

While electronic communication might make us more productive, it’s questionable whether it genuinely makes us happy, the focus of the University of Michigan paper. Facebook, in particular, has faced a great deal of criticism for inspiring narcissism and depression in its users. Like many before it, a paper published in the Journal of Social & Clinical Psychology this past April found Facebook made people depressed, anxious, and jealous of their peers largely due to “social comparison.”

The average age of a Facebook user has slowly crept into the 40s—as both the first generation of users grow older and teens flee the site in record numbers.

If you’re a regular user of the service (and 1 in 6 people on the planet are), you’ve probably run into this feeling. Scrolling through other people’s baby photos, wedding announcements, and vacation videos, you’re bound to find your life boring by comparison. As the researchers note, this is because we never imagine the selectiveness with which most users post things to Facebook. You’re less likely to share your worst or most humiliating moment with your 200 or so friends, and you likely don’t share the boring ones either. What’s left is a parade of exciting, eventful periods of our lives without the space between, leading others to believe our lives are nothing but a parade of bliss.

It stinks, and it’s a major problem with Facebook. Because the site bills itself as an official record of your life, one is prone to treat it like a photo album or community billboard, not as a personal space to have meaningful or even mundane discussions with friends. The Daily Dot’s own Nico Lang compared the service to a high school yearbook. “Those memories largely catalog the best versions of ourselves, the clubs we were in and what we looked like when we prepared for picture day,” he wrote. ”Imagine if every moment of those four years was permanently archived for you to scroll back through in horror?”

It’s not exactly an environment that encourages free expression. Snapchat, on the other hand, allows teenagers to experiment with humor and emotion—in order to better figure out how they relate to their peers. Snapchat’s very infrastructure mirrors the spontaneity teenage life itself, which is an extremely important aspect for adolescents attempting to craft an individual personality. If Facebook expects you to present a unified self to the world, Snapchat allows you to make it up as you go along.

The American Academy of Pediatrics cites the “fostering of one’s individual identity” and development of “unique social skills” as the key benefits of social media for teens. In order to accomplish that, teenagers need unstructured time online without fear of parental reprisal, which can be difficult to do on Facebook; as Facebook’s user base grows older, adults flood the site and kids evacuate to play where their parents can’t see. Snapchat gives them the freedom of communication the same way a night at a pizza parlor does.

Facebook, in particular, has faced a great deal of criticism for inspiring narcissism and depression in its users.

This theme signals what could be the next age of social media—both for teens and everyone else. Since last year, the workplace chat app Slack has been encroaching on email’s relative dominance of business communication. Email comes with a formality and decorum certainly befitting the workplace, but teams also build off of creativity and brainstorming—something best achieved around a conference table. Slack emulates that experience far better than the bland memos which have dominated work for decades.

Like teens, creative types benefit from media that is less formal and more experimental. While a controversial tweet may get comedians into hot water, most have found Twitter to be the ideal format to experiment with jokes and one-liners because, like being on stage, the response from the audience is quick and instant. Livestreaming apps like Twitch and Periscope have likewise taken off because they allow for the personable nature of a YouTube video but add the brevity and authenticity of reacting to something as it happens, just like real life.

Social media is meant to enhance, rather than replace, our social lives. A 2011 University of Pennsylvania paper found a close positive correlation between how much a person uses social media and how much they socialize in real life, suggesting social media actually encourages real-world engagement. This is why the takeover of platforms like Snapchat isn’t just inevitable—it’s also important. By encouraging users to be spontaneous, Snapchat is forcing people to be unscripted. If Facebook makes you into a smiling social media robot, Snapchat forces you to be yourself.

The quicker the next generation abandons Facebook, the sooner we can enjoy a digital experience as rewarding, awkward, surprising, and educational as our real one.