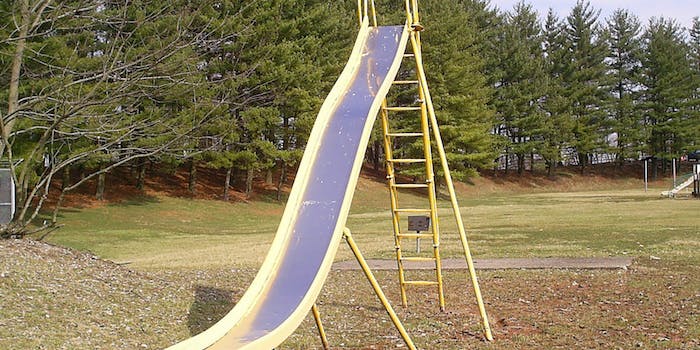 The most dangerous playground slide in the world

If playground equipment is boarded off, there's a very good reason.

It’s not uncommon for folks in their 20s and 30s to go to playgrounds in order to (pathetically) relive their younger days. One group of guys did just this and happened to come across a sliding board that had been closed off.

Deciding that a cordoned-off staircase wasn’t a good enough reason to render the slide dormant, one of the guys decided to carefully climb to the top of the uniquely designed double sliding board anyway. He sat down, took off, and quickly made a sworn enemy with the laws of physics.

The man’s hard fall (and brand new fear of sliding boards) landed him on Reddit, where r/videos was quick to comment on his ordeal.

“I wonder how many children left this place with crooked backs before the adults realized it was a terrible idea and shut this down,” redditor BigFatNutsack wrote.

Hopefully this guy does not make any sudden movements toward the rusty old swingset in the other corner of the playground.