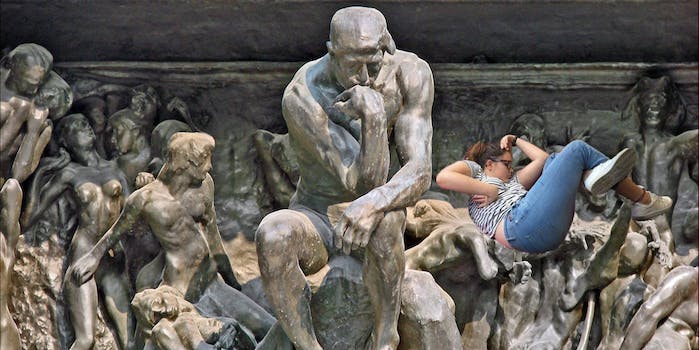 This sleeping student Photoshop battle gets an A+

A friendly reminder to never fall asleep anywhere in public.

Brisbane’s Queensland University of Technology found itself in the news this week for an unlikely reason: One of its students fell asleep. The unknown napper ended up contorted and exhausted at the school’s student center. Her pose has inspired a lively Photoshop battle and also serves as a pretty great reminder to never doze off in public.

Imgur user theshitclockisticking started this international competition. Users on Bored Panda only took it further, as did Reddit’s r/photoshopbattles.

There’s a very Renaissance quality to the contorted pose. It fits the golden ratio perfectly, and the sleeping student looks oddly at home among Rodin sculptures. The student sure doesn’t look comfortable, though. If only viral fame could help pay for a chiropractor.