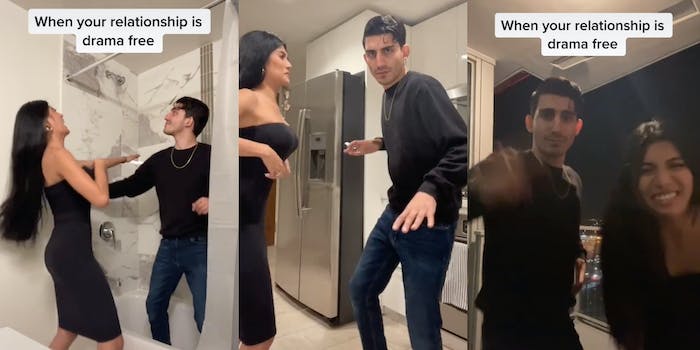 ‘You never know what goes on behind closed doors.'

In the wake of news surrounding social media personality Ana Abulaban’s death, TikTokers are reviewing her old videos with a critical eye.

Abulaban was killed, along with a companion, on Oct. 29 after reportedly seeking a restraining order against her husband. She reportedly accused him of domestic violence only a few days earlier, and her husband, Ali Abulaban, moved out of their shared apartment on Oct. 18. Days later, he allegedly returned to trash the space and plant an “app on his daughter’s iPad that allowed him to listen in on conversations in the apartment through his cellphone,” according to prosecutors.

He was allegedly listening in on the apartment via the iPad when he heard his wife conversing with another man. This prompted the 29-year-old to allegedly drive to the apartment and shoot his wife and her companion, according to Deputy District Attorney Taren Brast. Her companion was later reportedly identified as Rayburn Cardenas Barron. He was shot three times, in the neck, cheek, and in the back of the head, and Abulaban was shot a single time, in the forehead. Abulaban’s daughter was not at the apartment at the time of their deaths.

The San Diego Police Department previously told the Daily Dot that “the investigation is ongoing at this time, however, there are no outstanding suspects.” Ali Abulaban could face life without the possibility of parole if convicted.

In wake of the horrifying news, former fans of the couple’s content flocked to Abulaban’s TikTok page to examine her old videos. Numerous people fixated on one video in particular, which shows the couple joyfully dancing to “Lento” by Julieta Venegas.

The TikTok, which was posted back in early April, sports a simple text overlay proclaiming that the couple’s “relationship is drama free.” It also sets the scene via caption, labeling the video as “when your partner is your best friend.”

Viewers swarmed the video’s comments section, sharing their condolences and commenting on how the couple’s life was portrayed on social media. For many viewers, the video served as evidence of the social media paradox, in which we attempt to gain affirmation through projecting a false image of ourselves online. To viewers, it seemed that the Abulabans couldn’t possibly have been as happy as they seemed only a few short months before Abulaban was allegedly killed by her husband.

Pointing out that “absolutely nothing on social media is what it seems,” numerous people commented on the false face social media allows us to don. They noted that “you never know what goes on behind closed doors.”

Other viewers argued that “things can get bad fast” and insisted that the duo could have been this genuinely happy in April, only to have their relationship fall apart by October. Most people disagreed, however, and pressed the idea that the Abulabans were putting up a false face for social media.

Some people even went the true crime route and spent time perusing Ana Abulaban’s old videos to find hints of what was to come.

Many viewers and former fans simply took the time to share their condolences in the comments section and via stitches of the video. Calling the clip “heartbreaking” they wished the Abulabans’ young daughter the best, and prayed for Ana Abulaban to “rest in peace.”