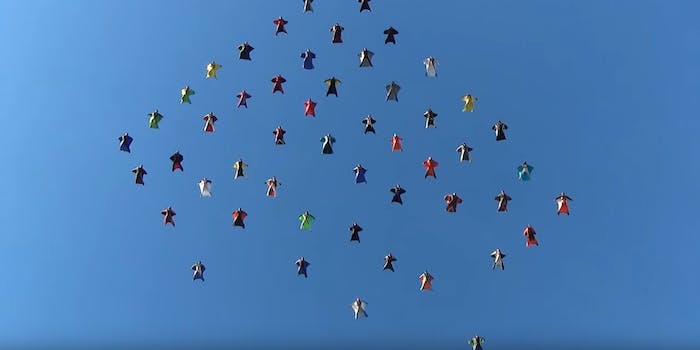 This is some seriously impressive coordination.

On Saturday, while you were at home sipping boxed wine and binge-watching How to Get Away with Murder, 61 wingsuit skydivers set the new world record for the largest aerial formation.

The daredevils leaped from three separate aircraft 13,500 feet over the Skydive Perris facility in Perris, California, creating the diamond formation before breaking apart at 5,500 feet.

We know what you’re thinking. And no, these are not flying squirrels or celestial beings brought here to make you feel guilty about sleeping until 3:00pm. They’re divers who wear special suits with pressurized wings that allow them to horizontally glide through the sky.

The divers created an aerial melting-pot representing 12 countries, including United States, Canada, Britain, Australia, Russia, Poland, South Africa, and Israel. If their diversity and ability to assemble in the sky without vomiting weren’t enough, just to show off, the flyers also broke the former record of 42 wingsuit jumpers twice in a single day—first with a squad of 50 jumpers, and later with a super-squad of 61 jumpers.