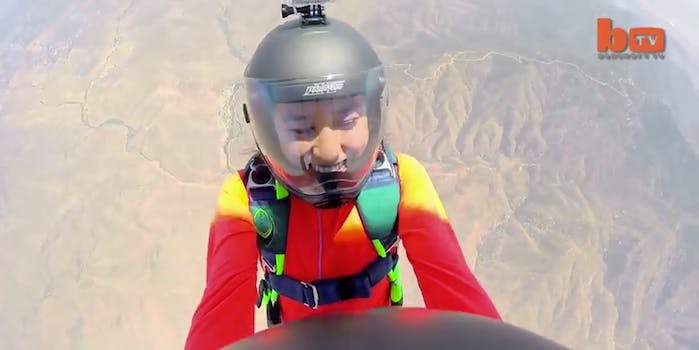 Boyfriend drops the ring during a skydiving proposal

Everything went horribly wrong—or so it seemed.

Two of the Internet’s unholiest aspects have come together in holy matrimony for one couple’s special moment: over-the-top proposals and unnecessary pranks.

Brandon Strohbehn wanted to propose to Nicole, his girlfriend of 18 months, while they were in the middle of a skydive. They’ve already done 224 skydives between the two of them, so popping the question in the middle of a jump wasn’t exactly out of place.

But then everything went horribly wrong—or so it seemed.

It all works out for the happy couple, but not before a giant wave of panic sets in for Nicole for a good few thousand feet or so.

You see, Strohbehn had actually planned the drop all along. The pair meet friends and family on the ground, where the boyfriend pulls out the real ring.

A proposal causes enough emotions without any added trickery.