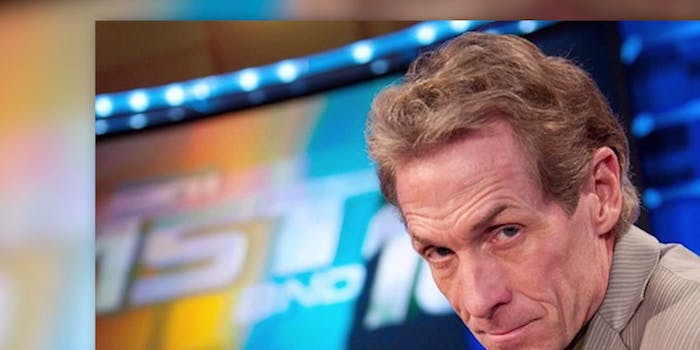 'I have created wars on Twitter, because for me and my taste, you’re better than Jay Z.'

Skip Bayless is the most indefensible product that ESPN puts on its television broadcasts. If you’re not a sports fan, you probably aren’t aware of Bayless’s particular brand, but he’s basically paid to be the ultimate contrarian. Every morning on First Take, he debates a rotating cast of chuckleheads on the exact same talking points. Popular topics include Bayless’s weird vendetta against LeBron James, Aaron Rodgers, and (understandably) Floyd Mayweather, as well as his slobbering love for Tim Tebow, Tony Romo, and the New England Patriots.

That being said, I kinda love Bayless.

He spouts garbage, undisciplined opinions, sure, but he does sorta seem like a nice guy who’s surprisingly progressive on social topics for a man his age and disposition. For whatever reason, ESPN decided to give First Take a quasi-hip edge, which means they slapped Rob Base and DJ EZ Rock’s golden-age hip-hop classic “It Takes Two” on the opening credits and have welcomed a slew of rappers to guest on the show.

That’s right, First Take is now a show where the hip-hop stars of today debate a 63-year-old Oklahoman about sports.

This means we’ve had dozens of insights on Bayless’s taste in rap music. It’s an incredible thing and we should be thanking ESPN every day for this opportunity. Bayless does not seem like a genre expert, but like everything else, he has no problem voicing his opinions. Let’s take a look.

He and Lil Wayne are apparently friends

No joke, one of the most recurring guests on First Take is Weezy himself, whose lyrics I imagine would turn off Bayless on first impression. However, Bayless maintains that he’s friends with Lil Wayne. In fact after Lil Wayne wasn’t seated at Chesapeake Energy Arena during the 2012 NBA Finals, Bayless urged Wayne to “text him” so he could sort it out next time. That means that Lil Wayne and Bayless text. What a time to be alive.

He thinks Eminem is underrated

Bayless, pure of heart and pure of mind, gets on the microphone and says “to me, Marshall Mathers is very underrated, he can out-rap most black rappers!” Which, while technically true, is probably not something you want to say on television.

He thinks that Nelly is better than Jay Z

This is probably my favorite Bayless clip of all time. For whatever reason, ESPN introduced the topic of Nelly’s omission from a “top rappers of the 21st century” list (which to be fair, is a joke.) Nelly is on the show, and says something sad because it’s 2009 and Nelly hasn’t been happy in nearly a decade.

“I’m not saying this because you’re across from me, I say it when you’re not across from me,” he says. “I have created wars on Twitter, because for me and my taste, you’re better than Jay Z. You’re a better performer, you’ve got a better voice, I think you’ve got better hooks.”

Goddammit Skip, why are you the most perfect human?

He thinks the Notorious B.I.G. is the greatest rapper of all time

OK, this is legitimately heartwarming.

Stephen A. Smith and T.I. are on the show, and they’re talking about who they think is the best rapper of all time. T.I. says Tupac, Smith says Jay Z, and then they cut back to Bayless sitting alone in the studio.

Bayless now has to select his favorite rapper.

You can literally hear Smith and T.I. snickering, but I’ll tell you, I’ve never heard anything more empathetic than this old Midwestern white dude talk about his love for Biggie Smalls.

“Even though he didn’t do it for long he did it the best,” says Bayless. “Just on power, and presence, and passion, even today when I hear his stuff it just knocks me over.”

“Hold on, are you acknowledging over national airwaves that you listen to Biggie?” asks Smith.

“You better believe I do,” says Bayless.