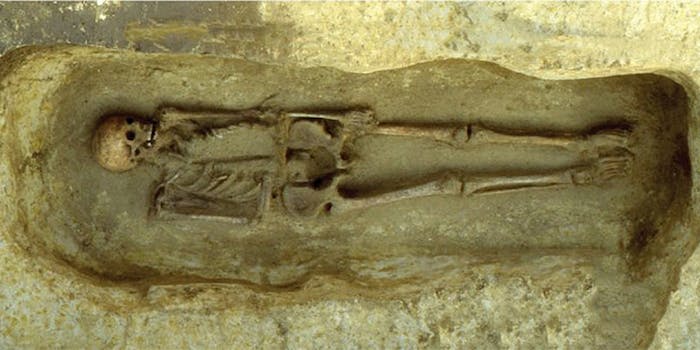 This ancient warrior took being 'armed' to a whole new level.

It must have been rough back in the sixth century. If you lost a limb, you didn’t have access to high-quality healthcare or any of the fancy prosthetics folks do today that make transitioning to life without one of your arms or legs a much simpler process. While there were some early attempts at prosthetic limbs discovered around that time, injured individuals were largely out of luck.

A 6th-century Lombard warrior buried in northern Italy appears to have worn a knife as a prosthetic weapon in place of his forearm, which had been amputated https://t.co/TUaR8059Qt pic.twitter.com/aW26FGLQHr

This Lombard warrior found in northern Italy (via Archaeology Magazine) was a bit of an improviser though, it seems. Researchers uncovered the long-past warrior’s remains, which were in surprisingly great condition, right down to the knife and buckle the once-ferocious warrior was seemingly wearing as a prosthetic arm.

You read that right. It wasn’t just a sword strapped to his arm for good luck in death. Researchers were able to discern that, based on the wear on his teeth from adjusting the prosthetic’s straps and the callus and bone spurs on his stump, he was indeed using the sword regularly as a replacement arm.

As expected, the internet is having a field day with this skeleton’s unorthodox choice of prosthetic.

There’s just so many awesome puns to be made about this cool discovery.

We totally get it, though. Uh, hello, it’s an ancient warrior who used a sword for an arm. If he looks this cool as a pile of bones, imagine how cool he looked when he was alive! It’s such a totally badass typical-ancient-warrior thing to do. This guy had no need for an arm! He was just trying to fight more efficiently!

Kind of sounds like some other people we know…

…and someone who should have seen that guy’s prosthetic maker, too.

Jaimie Lannister could have used one of those. #GameOfThrones

Of course, most people just have jokes. As expected. They are, like the prosthetic itself likely was during its prime, quality.

Warrior? Maybe he was just the best butcher in town.

Explains how he lost the eye.

Others are just impressed that this was even feasible at the time.

It is hard to imagine surviving a trauma necessitating amputation without blood transfusions and antibiotics (not to mentions anesthesia!). The human body is pretty amazing.