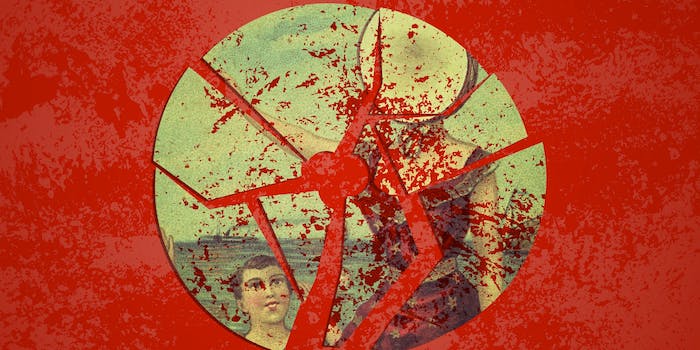 We have written before about the infinite meme-ability of Neutral Milk Hotel’s In the Aeroplane Over the Sea. It’s one of the great heartbreak albums of all time, but it also arrived at the dawn of the shitlord internet, which has made it a humongous joke for the rabble-rousers at 4chan’s music board.

We could go down that journey again and wax poetic about the delectable unknowability of Jeff Mangum’s songwriting, but that’s not what we’re here for. Below, I present you the full-length ska cover if In the Aeroplane Over the Sea. It’s one of the worst things I’ve ever heard. It also may be the pinnacle of civilization.

In the Aeroskank Over the Checkered Pattern by Skanktral Ska Hotel

Usually, when someone says this is the worst thing I’ve ever heard, it’s a huge exaggeration. In fact, I’d reckon that in capable hands, a ska version of Neutral Milk Hotel would be downright listenable. That’s… not what this is. Skanktral Milk Hotel’s interpretation of ska appears to be a single, callously strummed two-tone dirge and a few dead horns. It’s ska in the same way a chimpanzee is a person.

By the time you get to “Two-Headed Boy” (I’m sorry, “Rude Headed Boy”), it becomes abundantly clear that these guys are taking the piss and there’s not a shred of authenticity anywhere to be found—but I’ll always remember those first few desperate moments of “wait, they can’t be serious, right?”

Apparently Skanktral Milk Hotel released actually released the album on cassette—and it’s currently sold out. If there’s any justice in the world, In the Aeroskank Over the Checkered Pattern will become the most sought-after recording in the history of music collecting. Or, at the very least, I hope it motivates Mangum to get back in the studio.