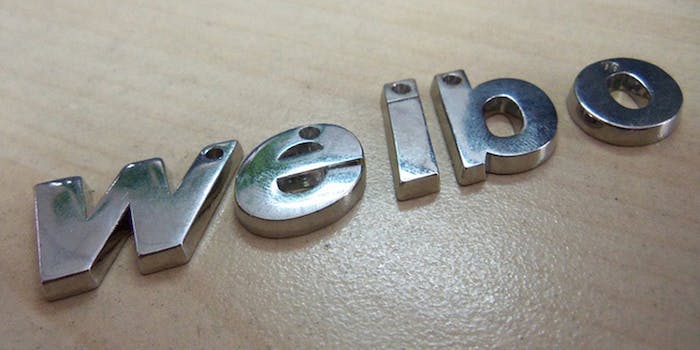 The milestone comes at a transitional time for the Chinese microblogging network.

The Chinese New Year was marked on Monday, and Sina Weibo users sent their best wishes to friends and families en masse using the social network. The statistics make sense. Around the holidays, cell networks always seem to get clogged up, and it takes forever to send friends good wishes by text. As a result, it’s becoming easier to send well wishes through social networking services.

In the first second of the new year, 32,312 posts were sent, according to a Sina Weibo press release cited by Chinese-language site Do News. In the first minute of the Lunar New Year, 481,207 messages were sent by Sina Weibo users.

The per-second record trounces Twitter’s best effort of 25,088 in a single second, which occurred during a television screening of an anime film in Japan. The U.S. tweets per second record was set this month, when Denver Broncos quarterback Tim Tebow hit an overtime touchdown pass to win an AFC wild-card playoffs game. Twitter revealed that 9,420 tweets were sent in a single second after his game-winning play.

With 500 million Internet users in a single country, Twitter has to feel aggrieved that it’s officially banned in China as that’s a huge potential userbase. However, a number of tech-savvy Internet users in the country are using Twitter by circumventing China’s firewall, as the New York Times reports.

Sina Weibo is being used by more than 250 million people, around a half-million of which are in the U.S. Its users post around 100 million times per day, less than half the number of daily tweets that are sent. Twitter is expected to hit a half-billion users next month.