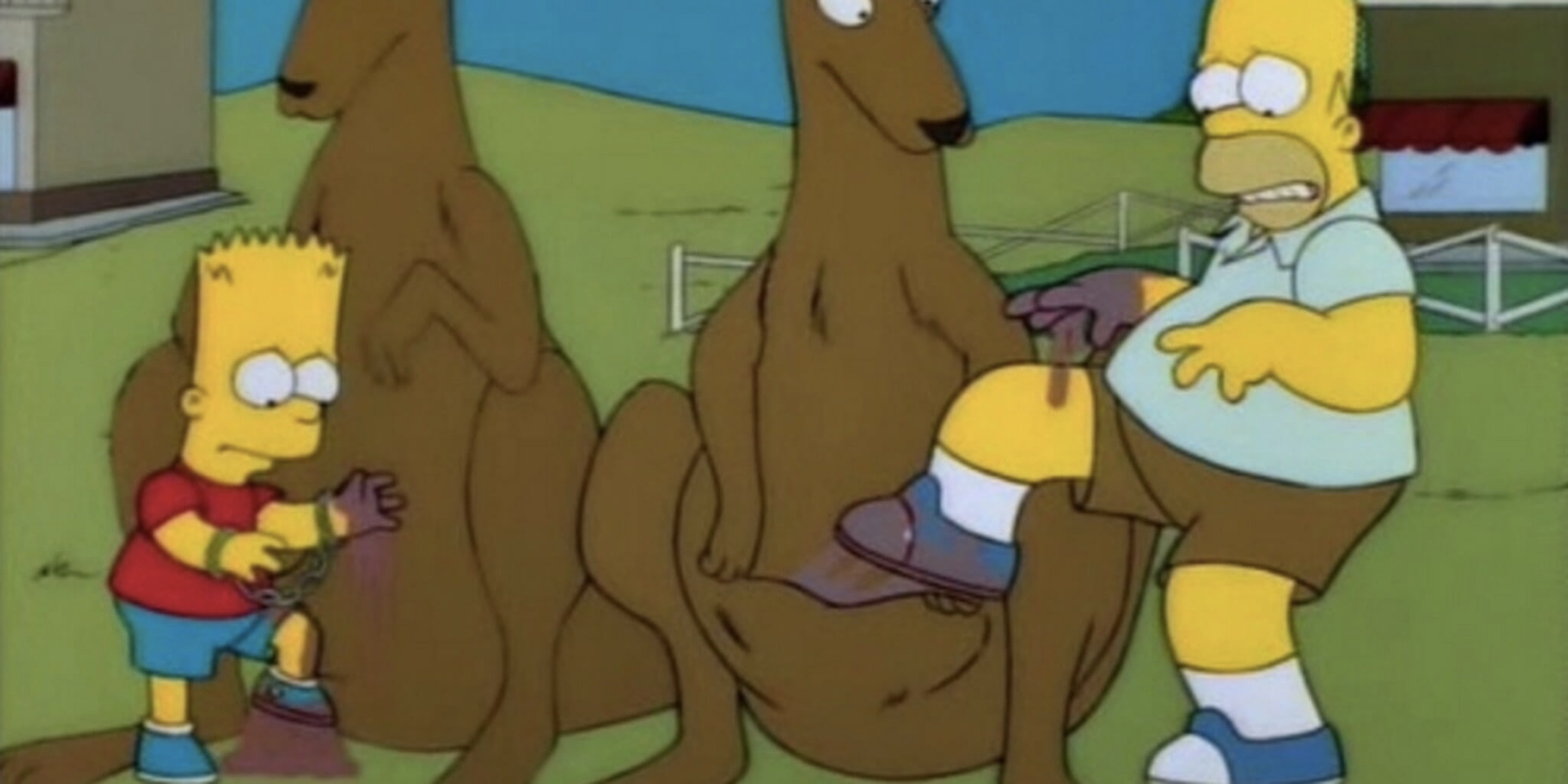 An apparent crime wave swept Australia this week, as tipsters flooded 7 News Australia’s Facebook page with reports of shady characters around town. Unfortunately for 7 News, however, that town is Springfield, home of The Simpsons.

Common tips offered to 7 News followed the trail of Snake, the denim-vested felon often found holding up the Kwik-E-Mart or inspecting the wallets of unsuspecting nerds. 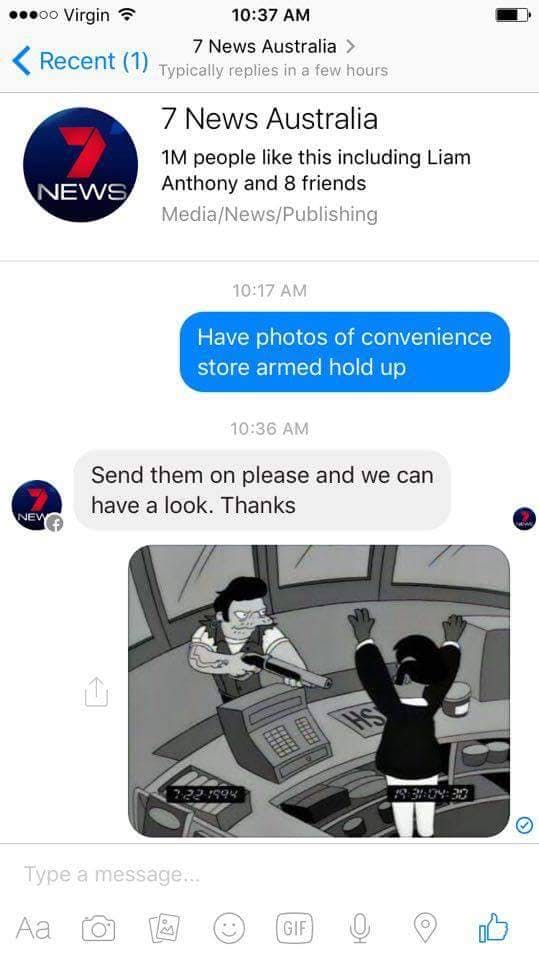 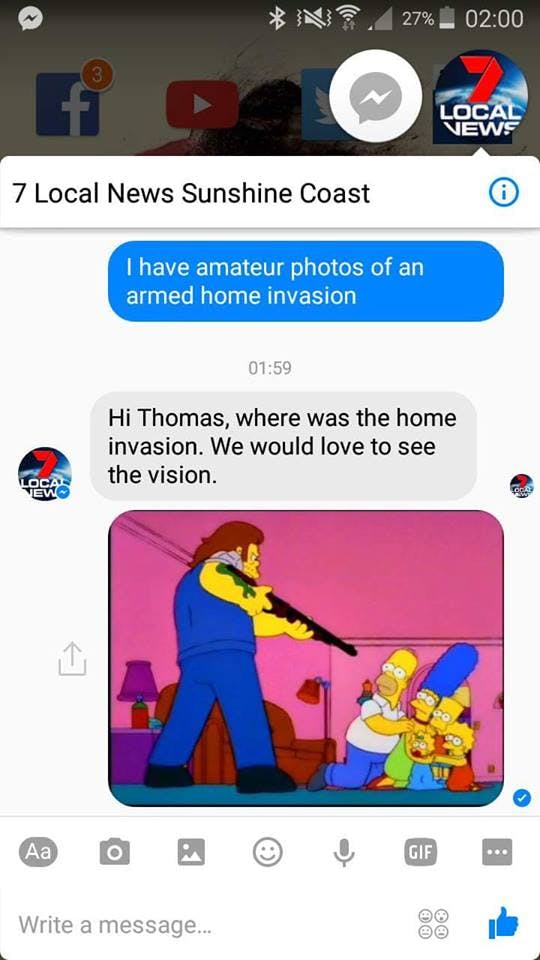 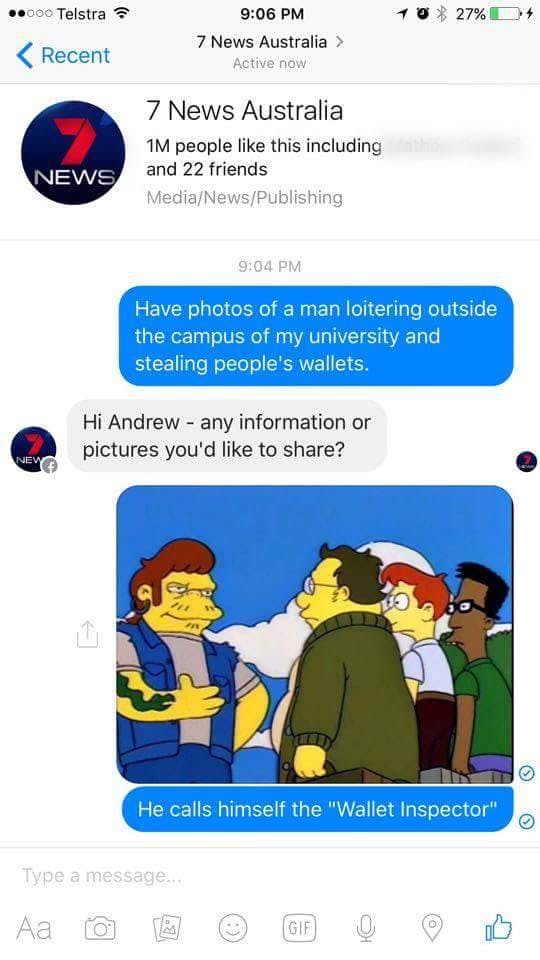 Brendan Dando, co-host of the podcast, told The Daily Dot via email that a fan sent them the first screengrab featuring Snake overnight. Dando wondered if 7 News’ falling for the prank was a fluke, and asked a co-worker to submit a false report again. “Success again,” he said.

“After posting our screenshot and urging others to try it out, a dull day at work suddenly became a lot more entertaining.”

What seemed like a coordinated stunt by the podcast, which boasts more than 52,000 Facebook followers, was a moment of pure, unplanned virality.

“What’s amazing about this is that it happened completely spontaneously,” said co-host Mitch Grinter. “We posted one or two that were shared rapidly, and before we knew it we were inundated with hundreds of messages from people getting in on it.”

And plenty of those submissions proved hilarious—like these reports of seemingly preventable accidents: 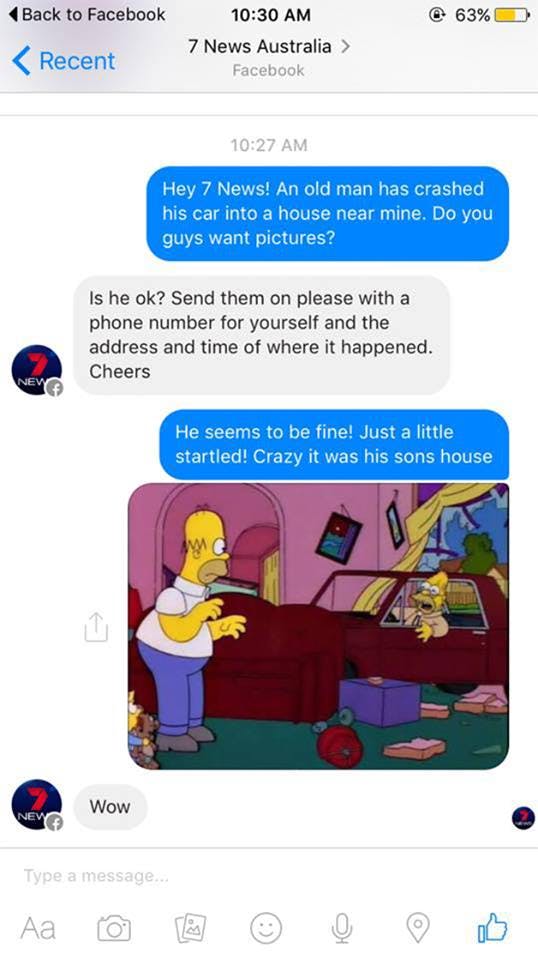 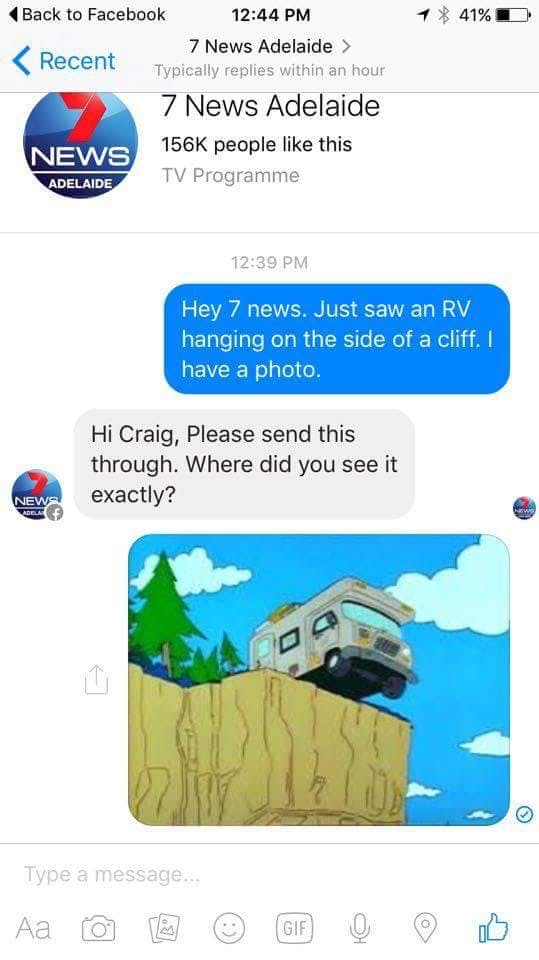 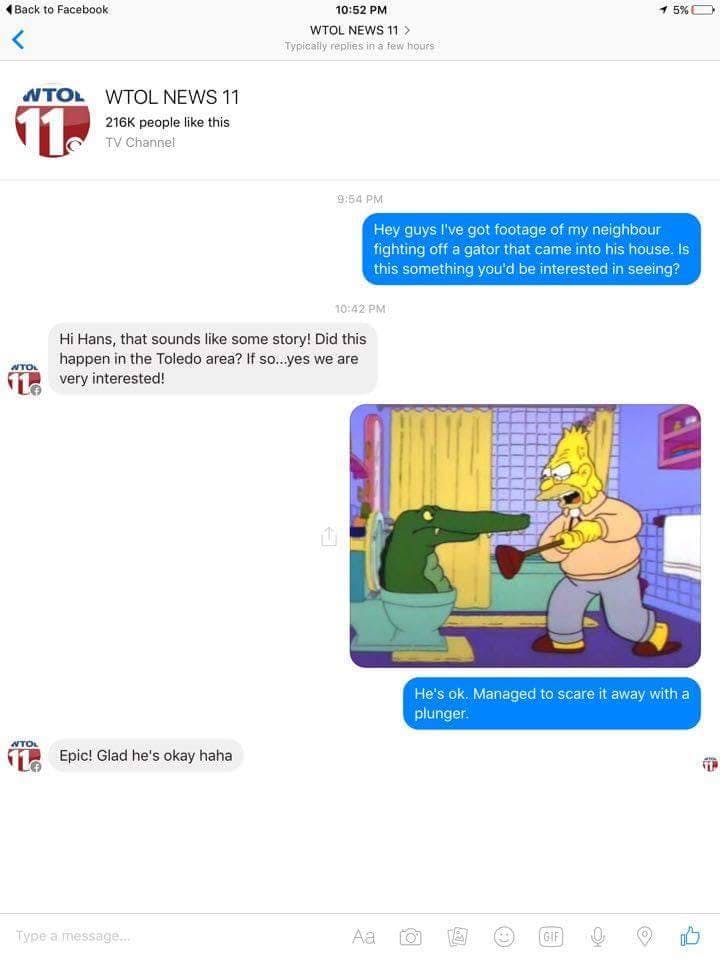 One lucky bystander was able to capture the Aurora Borealis—at this time of year, at this time of the day, in that part of the country—localized entirely in one man’s kitchen. 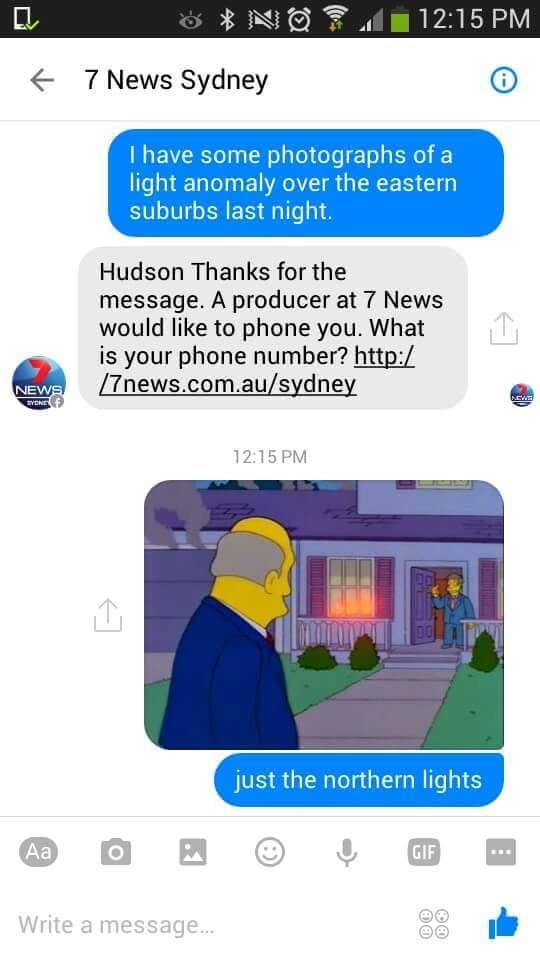 After enough instances of trolling, 7 News finally caught on and decided to join in on the four-fingered fun. 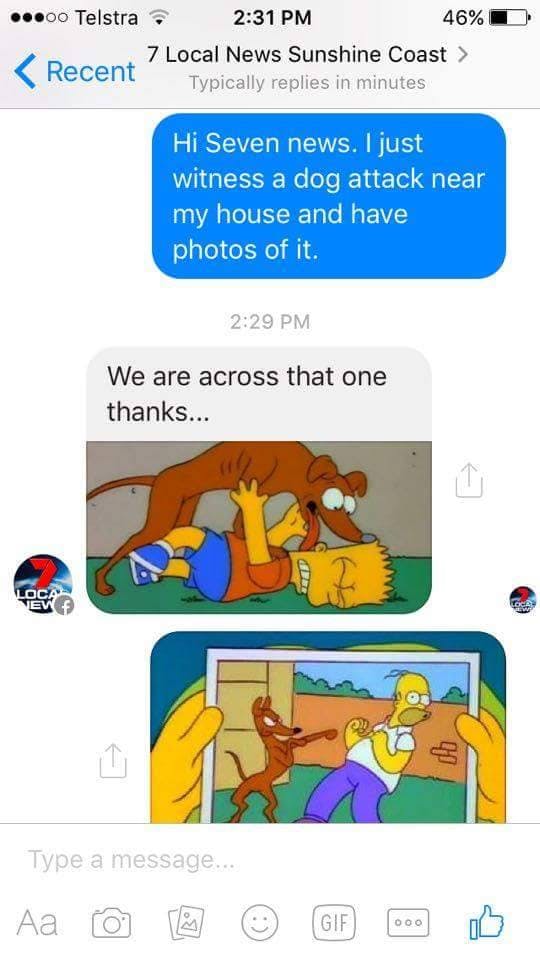 Four Finger Discount with Dando & Mitch launched in early-2015 as a way to rekindle love for classic Simpsons, as well as foster appreciation for the newer episodes. “We felt there had been too much negativity about the show in recent years,” Grinter said, “and wanted to relive its former glory.” But Dando and Grinter also hoped to recreate that sense of community that DVR and Internet streaming video have taken away from TV-watching.

The co-hosts don’t feel too sour about the newer seasons of the animated sitcom, however, accepting the evolution a TV show has to undergo in order to sustain itself for almost three decades.

“While we undoubtedly think the show peaked from seasons three to eight, some newer episodes are still great,” Grinter said. “Season 27’s ‘[Treehouse] of Horror’ is the most recent example that could easily be put up against their best work.”

But some of the best moments of The Simpsons come from those earlier seasons.

“It’s the heartfelt moments like Homer’s conversation with Lisa at the end of ‘Lisa’s Substitute,’ that define why The Simpsons is more than just a cartoon,” Dando said.

And it’s that humanity of The Simpsons that could fool news stations not just in Australia, but across the U.K. and U.S.

At the time of this writing, it remains unclear which way 7 News’ toilet water drains.

Updated 5:14pm CT, March 11: The latest version of this story includes comment from the co-hosts of the Four Finger Discount podcast.