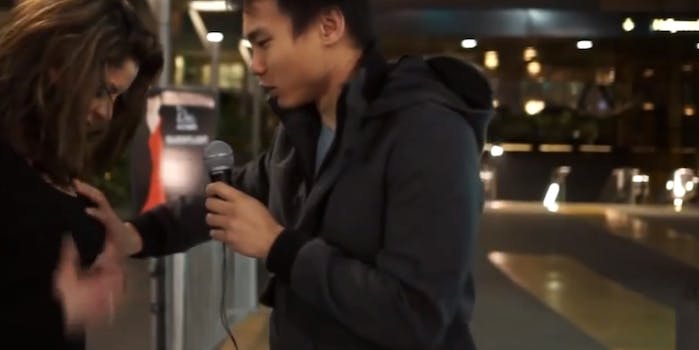 Simple Pickup blames anyone but themselves for motorboating fail

Last week, YouTube’s popular pickup channel, Simple Pickup, had their donation to the Breast Cancer Research Foundation returned after I brought it to the organization’s attention. Last night, they released a new video in which they blame “haters” for their motorboating stunt not going as they’d hoped. And their fanboys came out swinging. Here’s what one tweeted at me: That’s very flattering, to be blamed as the sole reason their video got them banned from donating to the Breast Cancer Research Foundation. That’s also a pretty explosive claim, that feminism is a bigger problem than breast cancer. I’m sure there are a lot of people who’d question that.

The video that led to this donation being returned was one in which the men of Simple Pickup —Jason, Jesse, and Kong—donated $20 to the Foundation, for every women they “motorboated.”

It sparked a lot of debate about whether the Foundation should have accepted their donation. Should they take any money they receive, regardless of where it comes from? Or do they reserve the right to choose? In the response video, Kong says there will always be haters on the Internet, and that “99 percent of the time,” he doesn’t care. But in this case, he says, his critics were “completely out of line.”

Simple Pickup is popular with men of a certain age, namely college students, and their videos regularly get more than 100,000 hits. The motorboating video received more than 2 million. So posting this response video and blaming “haters” is a pretty easy way for them to galvanize their fanbase into jumping onto the easiest target. Like those meddling feminists with no sense of humor!

Let’s revisit that claim that his critics were “completely out of line.”

Over the summer, fellow Daily Dot writer Gaby Dunn questioned whether Simple Pickup’s videos are harmless fun or sexual harassment. She cited one video in which they also attempted to motorboat women:

“In a video about Comic-Con, Kong asks a woman in costume if he can motorboat her breasts. When she says no, he does it anyway. In another, a woman asks to be left alone, and the camera pans down and zooms in on the butt crack peeking out of her shorts.”

Then there’s the video in which the guys pretend to be gay:

“In another video, the Simple Pickup guys pretend to be gay to pick up women. Jesse tells a group of girls, ‘Are you trying to get raped? Because I’m down to rape you if you’re down to get raped. Just kidding. I’m not gonna rape you yet.’”

Fans like my reactionary Twitter friend @libertarian_adi represent their larger fanbase, and this video is meant to egg them on, to bandwagon on some perceived slight. Their legions have filled the comments section with useful ways to donate the money, as well as the usual misogyny and ignorance that fuels a YouTube comment section, like wishing cancer on feminists.

But that’s what it takes to shift the blame here: leagues of cognitive dissonance. By continuing to ignore the problems with not just their motorboat video but the majority of their videos, they can continue to blame anyone but themselves for their failure. Shifting the blame to one person or group is not only lazy, it completely ignores the bigger problem with Simple Pickup’s videos: that they add nothing positive to the conversation about how men view women. Perhaps that’s why the BCRF refused their donation. Questions?

And it’s apparent from this video that Simple Pickup didn’t really care to question why the Breast Cancer Research Foundation might have a problem with men treating women’s breasts like playthings, in the name of charity. So congratulations, guys: You threw a tantrum and filmed it, and in the process made it clear how petty you can be.

No one intentionally attempted to derail their donation, as some Simple Pickup fans have claimed. I simply asked a question.