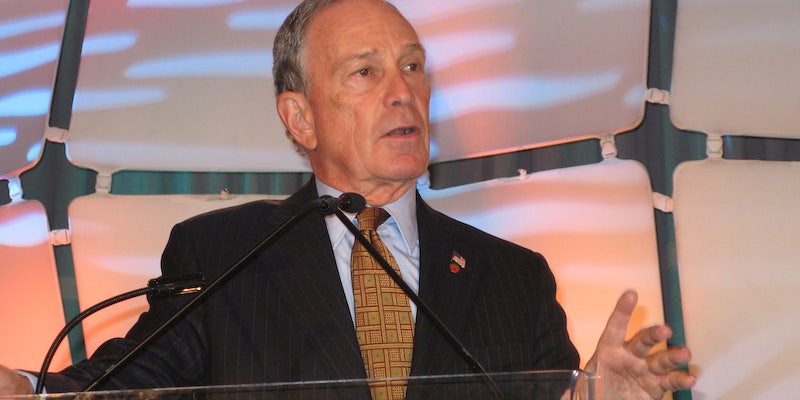 It's not just because of the billionaire's tech background.

The full force of Silicon Valley’s political influence has yet to be unleashed on the race for president. None of the candidates have sparked the same enthusiasm that a young upstart senator for Illinois did back in 2008. Hillary Clinton is the presumptive favorite in Silicon Valley, but the high-rolling contributors I’ve talked to just aren’t that excited by a candidate who has shifted her views on a number of popular ideas—most notably free trade and public charter schools.

There had been previous stories in early fall that some in the Silicon Valley elite were discreetly pushing former New York Mayor Michael Bloomberg to be president; this week, he acknowledged that he’s actively considering a run.

As soon as the news hit, my Twitter feed exploded with an uncontained giddy excitement—like someone had just placed a wrapped present under the political Christmas tree in the exact shape of toy they’d been desperately wishing for.

To quantify whether Bloomberg really was Silicon Valley’s secret favorite for president of the United States, I conducted a poll from the Ferenstein Wire’s special sample of tech startup CEOs (more details on that philosophy and methodology of the poll here). 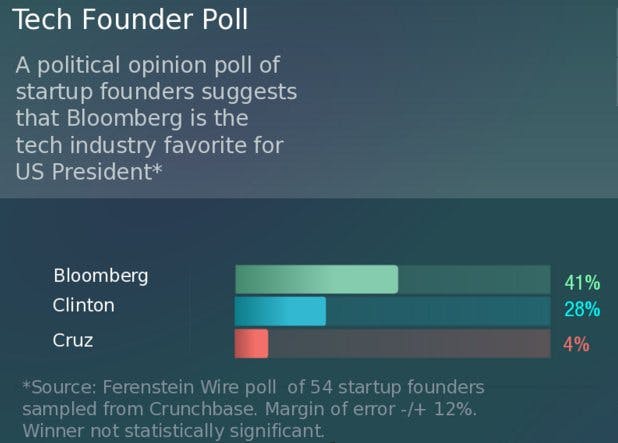 The results: it’s no illusion, the data suggests that Bloomberg is overwhelmingly Silicon Valley’s pick for president. Of the 52 tech CEOs that responded, 41 percent wanted Bloomberg for president, with Clinton taking a distant second at 27 percent. That’s triple the support Bloomberg got in a poll of the general public (**note margin of error discussion below; winner not statistically significant).

“Bloomberg is the best of the bunch,” said one respondent.*

“I think the country needs a business savvy person to run, since it is basically a global organization. Hence, I would support a president with business background,” wrote another.

Why Bloomberg? Aside from the fact that he’s a successful technology businessman, my hunch is that he perfectly typifies the unique political ideology of the tech industry, which is both pro-government and pro-capitalism, where the state’s primary role is investing directly in citizens, rather than regulating the industry.

Where the government does run programs, they’re run like a business. Bloomberg was a strong advocate for public charter schools, which have received hundreds of millions in funding from the likes of Mark Zuckerberg and Bill Gates.

Post mayorship, Bloomberg has been a trailblazing advocate of so-called “social impact bonds,” which allow private companies to rake it substantial profits if they fund innovative pilot programs to endemic social problems (like prisoner recidivism or high school graduation).

It’s the kind of combination of capitalism and social welfare that gets techie do-gooders excited.

In a previous Ferenstein Wire poll, Hillary Clinton was the overwhelming favorite, snagging roughly 50 percent of tech CEO support. This is because the Valley is overwhelmingly Democrats—but a new type of Democrat. While the tech elite do love government more than libertarians, they view the role of the state as an investor in the market, not a regulator.

The Democratic Party comes closest to this vision, because they are the least allergic to government funding of education, more high skilled immigrants, and support for scientific research.

But a Clinton Presidency will at best be a moderate version of Silicon Valley’s vision for the government, whereas Bloomberg would likely be a much purer version of it.

Of all the candidates, Bloomberg would place innovation as the centerpiece of his vision for the world. It should be no surprise then that the world’s leading futurists are begging for his brand of leadership. Should he run, we could once again witness how Silicon Valley can disrupt campaigning for the most important elected office in America.

*Quotes have been edited for clarity and grammar.

**Note: While large, Bloomberg’s lead is within the margin of error. So-called “elite” samples (link) are just naturally going to have larger MoE’s, because sampling CEOs is much more difficult than the general public (even though there are fewer CEOs than total citizens, modern statistical techniques still often require thresholds for populations larger than a few thousand people). Anonymized raw data and R code are available upon request.