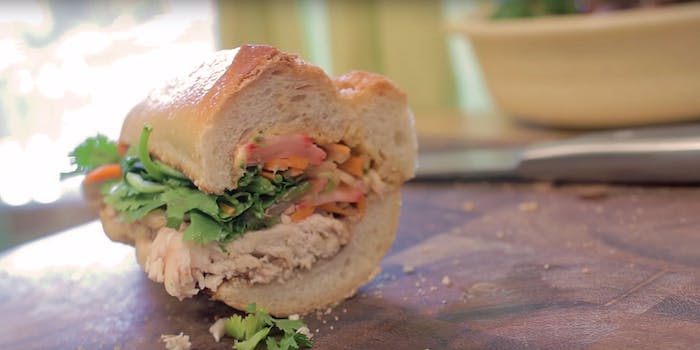 The quiet chef of Silently Cooking savors sound and simplicity

Shhh—just listen to that sizzle.

I love Silently Cooking because it delivers exactly what it promises: A man, in his kitchen, quietly cooking.

It’s weird to think that so much of culinary entertainment is marked by these huge, bouncy personalities talking at length about proper searing methods and the ripeness of shallots when in reality, cooking can be a very subdued, meditative process. Just you and all the wonderful tender sounds of food.

Cooper Nelson captures that soothing, down-home familiarity beautifully on his channel. In each video, he shows off a new recipe without saying a word. It’s quasi-ASMR, but you can still pick up some real tips—I, for instance, feel pretty confident about making my own mayonnaise now.

We caught up with Cooper to talk about Silently Cooking, his burgeoning fan base, and the audio pleasures of sautéing vegetables.

First things first—how long have you been cooking?

I’m a self-taught cook, cooking since high school. One of my favorite things growing up was when my parents would teach me and let me cook. When I got to college I had a good head start, and I really expanded my love for cooking in watching Good Eats, Food Wishes, and various other cooking shows that helped me feed myself in college.

I like your channel because it’s super specific. It’s called “Silently Cooking,” and naturally, you cook without talking. The brand is really simple and direct, I dig that a lot. What first gave you the idea?

I remember I was driving! It was when I first got out of college. I was living on my own, first job, first apartment in Schenectady, New York. So all the cooking I did I was learning from YouTube. And there was some great stuff! Food Wishes, especially, is still an absolute favorite. So I would look up recipes for new things I would want to cook, read lots of different recipes, then head to YouTube to get some visual aids.

The thing that annoyed me the most was that all these internet cooking shows would never get to the point. They talked and talked and talked. I would scrub through the videos to get the information I needed, and it got on my nerves. There were very few videos out there that were visually stimulating, and quick to deliver info.

I was driving in my car one day thinking about silent films and how they relied on visuals to tell their stories. People think silent films relied on text cards, but that really isn’t true. Videography is visual storytelling. I figured I could try to create Visual Recipes. I had just started my career as a news videographer, and so I figured it would be a cool way to practice putting short visual stories together.

You’ve amassed a following of fans—what do you think it is about Silently Cooking appeals to people?

I think they find it relaxing. They enjoy hearing the sounds of cooking. I think people watch the videos and get inspired to cook themselves. And that’s the coolest thing ever! I love when people contact me saying they’ve tried my recipes, and I love it even more when people give me tips and advice. I’m constantly learning new things about cooking.

The videos are short, to the point, and look good. My goal is to create something people can love to watch and listen to, and if they learn something in the process, even better!

Do you consider your channel ASMR at all?

I had no idea what ASMR was until I started making these things. Now I try to incorporate sound into my video more than ever! I love hearing when ASMR fans enjoy my work.

What is your favorite food sound?

That’s the greatest question ever. I think the sound of sautéing. Because if you’re cooking veggies, or chicken, or anything in a pan, and you can’t hear it, you may not be doing it right.

This is kind of a general question, but you must be having fun, right? Like, this a little project you started, and now you’ve got small group of fans, and you can interact with them and exchange recipes with them—it just must be a new, cool part of your life that didn’t exist in the past. What does that feel like?

It’s the coolest thing ever!  I’ve heard from people all over the world. I’ve gotten to talk to people from Japan, China, India, Italy, Mexico. It’s crazy! And I’ve gotten so much information from meeting and talking with these people online. I don’t do it for fame, I do it because I love talking to people about food. How freaking cool is that?

I also love the hate-mail. People get so angry when you do stuff they don’t like. It’s fantastic. I got chewed out by a lot of people for my chili video. There are some foods out there that generate little cults, I always find that silly. As long as the food you’re eating is good, and you’re enjoying it, you’re doing it right!

Last but not least, what do you want to cook for the channel that you haven’t yet?

I can’t wait to make pizza. I’ve got big plans for that recipe, and I’ve been practicing my dough-stretching technique. Me and one of my best friends are going to make it together. I won’t say much, but it’s gonna be yuge.