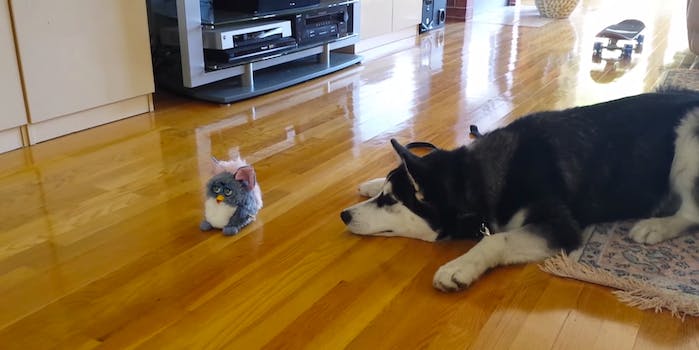 Siberian Husky and talking Furby meet in an adorable showdown

The Furby, as expected, is unmoved.

We really should have listened to our canine friends about Furbies.

Although they’re nowhere near as popular as they were in the late ’90s, the furry electronic toys are still taking over households and creeping many of us out—especially if we’ve pretty much forgotten about them.

One of the many recently terrified by a Furby is Max, a Siberian Husky whose owner captured his sudden confrontation with a toy in a priceless video. It’s safe to say Max isn’t happy about the showdown.

In the face of such a perplexing intruder, Max’s barking never ends. He circles the Furby like prey, barks at it, growls, and does basically anything he can to register his displeasure. In return, the Furby utters one of its catchphrases—because even an angry dog is still a triggering action.

The Furby is unmoved. It is cruel and merciless.