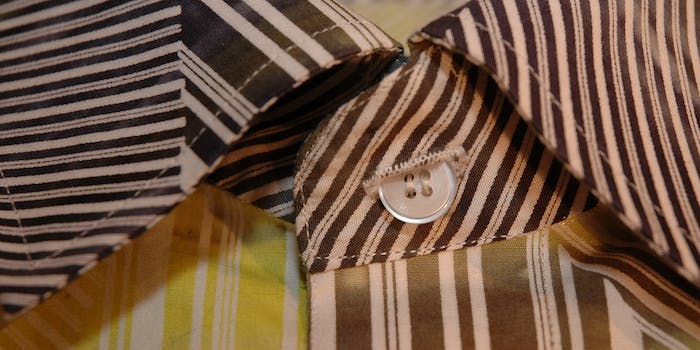 Catchall Web concern the Awl has spawned a number of niche sites in its time, but the newest subsidiary addresses a crisis beyond the purview of a humble blog. Say hello to Shirterate (pronounced shirt-ayr-a-té).

We’ve all felt the sartorial unease that this service seeks to disrupt: the feeling that, although a dude has had every advantage in life and is considered importantly wealthy or influential, he dresses himself like an idiot. On Shirterate’s homepage, which doubles as a manifesto, Awl coproprietor Choire Sicha points out some common faux pas and explains his noble mission.

“I’ve assembled a crack team of homos that understand how shirts are supposed to look, and where pants are supposed to stop, and what belts are,” he writes. “We have good taste. And we don’t work for you, so we’re not afraid to tell you that you look like shit.” That honesty will cost you anywhere from $250 (email consultation) to $10,000 (for a “new wardrobe special”).

We caught up with Sicha—in Gchat—and delved into his hypercapitalist fever dream, which has already earned him a cheeky cease-and-desist letter. (It came from a lawyer representing Adam Frucci, editor of the Awl companion site Splitsider, whose image was originally featured on the Shirterate site.)

Why did I invite MORE email into my life? Hmm. I think the answer is “no.”

Where is the original Frucci photo? I’d like to get us sued.

I got it from his AMEX COMMERCIAL.

Oh, of course. Surprising they didn’t dress him well for that. You’d say the problem goes beyond the neckbeards themselves, yes?

Yeah I think the real problem is a range of typical “young guy” issues. Because it’s not really just rich dudes. For me it’s the most heartbreaking thing when I see some young woman all gussied up for a date, in a dress she clearly thought about, and probably in PAINFUL SHOES, and the guy is wearing jeans and an untucked button-down. It’s just like, what the fuck is this, a PORTRAIT OF THE PATRIARCHY???

How ought a man dress for a date?

He should put his shirt inside his pants, where he keeps everything else. For starters.

It seems so simple.

IT DOES AND YET. I get the thing though where dudes are like “There’s no middle ground between cargo shorts and ‘dress slacks.’” They’re not TOTALLY wrong. Men’s casual has gone like towards SWEAT PANTS. I mean it’s hot out, and like, you know, #yolo.

Do you think the tucked-in shirt look died when Seinfeld went off the air? And is it ever appropriate to tuck a T-shirt?

The other thing is that I think guys are self-conscious that they’re not Robert Pattinson–sized, and so they’re like, “If I tuck in my shirt then I’ll look a little out of shape so fuck it.”

But how sincere are you about wanting to help rich white bros, really? I think anything that helps to soil their image might be a good thing. I’d have them wearing jorts, even.

I am deadly sincere, in a way. Part of the reason the site is so mean is that, in my old life as an art dealer, I found out that the meaner you were to clients, the more they wanted to buy art from you. All rich bros are like that. They’re betas, and I’m an alpha. And they just need someone to boss them around. Honestly the best services in the world that you can buy are people confidently telling you what to do. Rich bros get decision fatigue too!

Oh my God, a young Piven. This was the look back in north Chicago and Evanston, when the Cusacks and the Pivens ran that town. You see how not right it is, the hot belted jeans constraining his sad T-shirt. He can get away with wearing almost anything, though, due to sexual magnetism. Ugh, what a putz. Also look at that dick in the button-down and the tie, smh.

Definitely have not seen him in another movie ever.

I’ll be attending an impromptu beer pong tournament on a chartered WWII era minesweeper in the Gowanus Canal to celebrate seed stage VC for my startup, ManifestPresstiny (shirt pressing & delivery exclusively on WhatsApp & WeChat), and I don’t think my ‘mericas Chubbies and Bonobos gingham are going to cut it for this one. Help?

Can you name the single worst-shirted rich bro alive today?

I don’t think he’s actually rich though. I mean none of the startup boys are technically “rich” anyway. Rich on paper don’t count. ALSO you know what’s fascinating? Brian Chesky has a UNIFORM. He totally has a personal shopper already buying the exact same shade of gray. “Only one shade of gray for Chesky.” LOL AM I RIGHT.

That’s wise. I mean, safety first. PLUS you know that you’re working your eye color. (“Bloodshot.”)

It’s like hanging on to the fashion cliff by your eyelashes.

Such is life. NO RISK… some reward.

A bottomless chasm of mixed patterns below.

You can’t fight the funk.

You spoke of decision fatigue. Is there any chance of some bright future when humans can shed all responsibility for choosing how they dress? Or is that the problem already.

Oh you know someone’s working on it right now. But yeah, what I see on men around me (LITERALLY AROUND ME IN MY OFFICE RIGHT NOW), is most of them have a uniform. So they’ve de facto given up. And their reasons are good! Part of it is cost, part of it is ease, and part of it is because men’s magazines have forsaken them. So they want to be comfortable and happy. That’s good! But rich people are supposed to be better in America. That’s in the Constitution. So they need to try harder.

If we can’t worship the wealthy, we’re not Americans.

That’s how this great country started, and it’s going so well!